With all the hustle & bustle of the last four months – ie “the busy season” – behind me, I was finally able to catch up on The Walking Dead game.

I played episodes three and four, Long Road Ahead and Around Every Corner respectively, and was very glad to see that, in my absence, the high standard of quality had not diminished. 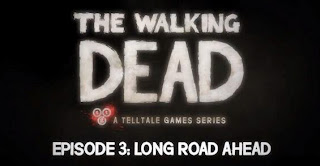 Over the dozen or so hours I've been playing this game, the negatives have all but disappeared and what I'm left with is an unrelenting desire to try and keep the wheels from falling off the wagon. It is not an easy task, as I am starting to realize that there are no good decisions, just ones that avoid immediate disaster. On the game play side of things, I do like the emphasis on puzzle solving. Sure, said puzzles are not particularly challenging and really just amount to a series of fetch quests, but they always seem to fit the situation and rarely feel arbitrary.

There was a moment in Long Road Ahead that shocked me so much that I actually gasped aloud. It was a defining moment of not only this story, but also the power of this game. I spent the next few days lamenting whether I could've done something to prevent it. That feeling left me with a grudge that ended up just getting me in more trouble in the following episode.

By the end of Long Road Ahead, my group was left shattered and felt like it was being held together with duct tape and a prayer. It is also becoming more difficult to shield Clementine from the ugly stuff, and I'm constantly finding her questions tougher to answer truthfully.

The Walking Dead comic is superb, and the show in the last ten or so episodes has been making great strides, but there is something about the interactivity of this game adaptation that makes it even more substantial somehow. Check back later this week for my continuing experience with Around Every Corner.
Posted by Jay Clarke at 10:00 AM