The opener for the twenty-fifth edition of Midnight Madness was Lucky McKee & Chris Sivertson's remake of their debut from 2001, All Cheerleaders Die.

Resurrected by witchcraft, a group of high school cheerleaders quickly realize their reanimation comes with some bizarre side effects.

Sooner or later, I'm going to learn to stop watching these guys' films. After Wicked Lake, after The Lost, after The Woman, you'd think I'd learn my lesson. All Cheerleaders die is a terrible mess of a movie. It's completely tone deaf and constantly impedes any enjoyment by attempting to be funny, titillating and offensive in equal measure.

When I saw Wicked Lake in 2008 (which Sivertson wrote) I marvelled at the bumbling of a movie where “a coven of nympho lesbian witches rent an isolated cabin in the woods and get down to some hot four-way action.” Now, we have All Cheerleaders Die where a group of cheerleaders, some of whom are bi-curious, go to town on their high school football team... 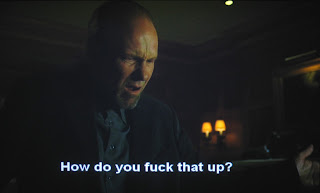 This movie is also not helped by some sub-par visual effects and a blatant disregard for writing characters one would actually care about. I can't fault any of the actresses, mind you. They all do the best with what they were given, especially relative newcomer Brooke Butler, who plays the cheer captain, Tracy. I wager that is why the scene where she gets cranked in the face by her jock boyfriend was where I turned the corner from Annoyance Road onto Hate Avenue.

If All Cheerleaders Die succeeds at anything, it is that it makes similar films look better. Detention and Jennifer's Body – which coincidentally opened Midnight Madness in 2009 – both received lukewarm receptions upon their release, but are masterpieces by comparison. Detention may have been wildly unpredictable, but that in itself was a constant and the setup in Jennifer's Body was way simpler and somehow more plausible. Even the eventual in-fighting between the girls was better presented in 1996's The Craft.

The best way to describe All Cheerleaders Die is to echo the filmmakers' statements during the Q&A, where they explained where they were coming from.

“It's like when you're 17, and you have all this energy and you don't know what to do with it.”


That's a great way to describe this movie, as like a drunken senior running down the street kicking over garbage cans, All Cheerleaders Die is just loud, obnoxious and directionless.
Posted by Jay Clarke at 12:00 PM