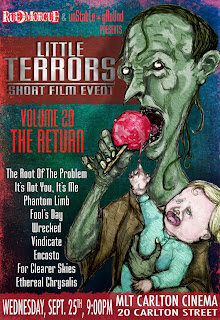 After a small absence, Justin McConnell’s Little Terrors returned to the Carlton on Wednesday. The twentieth edition of his short film series, once again stacked with great content, emphasized a more comedic bent this time around. Here were some highlights.


Director Ryan Spindell takes our inherent fear of dentistry and spins this ether-fuelled yarn called Root of the Problem. This was well acted with some unexpected effects gags at the tail end that really impressed me. It’s always good to see Brea Grant pop up in genre fare, as well. Here’s the trailer below.


The duo behind the flick Resolution are back with a short called Wrecked. Starring KassemG as a marooned fighter pilot, it is just the kind of mind-bending surrealism we’ve come to expect from these guys. Fortunately for you, the entire fourteen-minute short is now online via the new Tribeca Film initiative Picture Show. Here it is below. Enjoy, brother!


I love the show Community, and I love Gillian Jacobs even more, so imagine my elation at seeing her in the Matt Spicer directed It’s Not You, It’s Me. I like the well-timed comedy of this one a lot, which makes the simple storyline a success. For your viewing enjoyment, here it is below.


My favourite of the night was definitely Cody Blue Snider’s classroom gore-fest Fool’s Day. This wonderful short involving a fourth grade class’ April Fool's prank gone horribly wrong is a real winner. It is chock full of great comedic performances with dialogue to match, and despite being almost twenty minutes never runs out of steam – a feat in itself. This was a delight. Check out the trailer below.


It was another strong night for Little Terrors, and next month’s lineup on Devil’s Night – to be aptly Halloween themed – will likely not disappoint either. Until then, kiddies…
Posted by Jay Clarke at 6:00 PM