I saw a fantastic documentary a few days ago called Chuck Norris vs Communism. The brainchild of filmmaker Ilinca Calugareanu, CNvC tells the story of how one man provided an escape to the oppressed people of Communist Romania during the 1980's through film - more specifically bootleg VHS tapes of movies from the West. Check out the trailer below.


The whole film can currently be viewed on the PBS website until Jan 18th by clicking here and I wholeheartedly urge you to do so. This film is wonderful, and even though it might sound silly to say, I actually got choked up a few times during it.


Those of us old enough to remember all have fond memories of watching eighties movies on VHS, but imagine if they told of people, places and things that were completely foreign to us. Imagine how many eyes must have been opened to possibilities beyond their ruler's iron-fisted regime. Imagine the exhilaration from not only what was onscreen, but also the fact that just watching it was considered illegal. 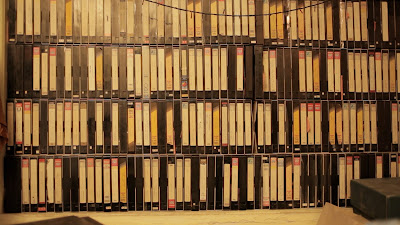 There's something really special about this doc. There really is.
Posted by Jay Clarke at 10:00 AM