I decided to go big, and post the mother of all intros today. Here's the awesome ident for Cannon Films (complete with authentic tracking static).


Cannon Films was synonymous with home video. If you were renting B-movies back in the eighties, it would've been impossible for you to not come across that logo above. As you may know (especially if you've been following along with the Loose Cannons podcast), Cannon was established in the late sixties, but didn't really hit its stride until Israeli businessmen Menahem Golan & Yoram Globus took over in the late seventies.


They produced and distributed dozen of films that ranged from action pictures like Sho Kosugi's ninja trilogy (Enter the Ninja, Revenge of the Ninja and Ninja III: The Domination) and Chuck Norris' action vehicles (Delta Force, Invasion USA) to crazy off-the-wall fare like The Apple.


As for horror fare, they released plenty, including X-Ray, Texas Chainsaw Massacre 2 and Lifeforce. I actually saw a bunch of Cannon's horror titles through Elvira's Movie Macabre in the early nineties, as they must have had a deal with them or something. Specifically in the show's fourth season, I remember staying up to watch (it came on after Saturday Night Live) the likes of Alien Contamination, Dr. Heckyll & Mr. Hype, New Year's Evil & Schzoid to name a few.


The above intro was taken from my badly beat up VHS copy of Tobe Hooper's 1986 remake of Invaders From Mars. 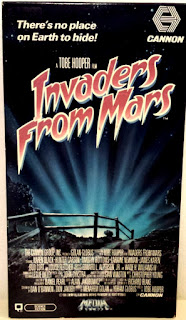 Anyway, have a great weekend, guys!
Posted by Jay Clarke at 10:00 AM