The other film I saw at this year’s Hot Docs was Irene Taylor Brodsky's Beware the Slenderman. 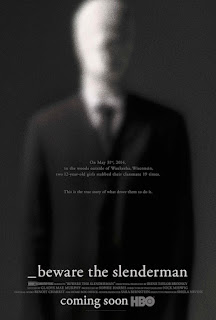 In 2014, in an attempt to appease a fictional character named The Slenderman, twelve-year-olds Morgan Geyser and Anissa Weier lured their friend Payton Leutner into the Wisconsin woods and stabbed her repeatedly.

First surfacing on the humour website Something Awful in 2009, Slenderman has become the Internet’s biggest urban legend, inspiring short films, art and online fiction. Though the doc's title may suggest that this documentary is an exploration of the Slenderman myth, it's really more of a true crime investigation. Brodsky had already begun work on a documentary that investigated how the Internet affects how we view the world when the story broke, so that explains how she managed to be there filming those involved in the case almost immediately after the incident.

The most chilling parts of the documentary are the videotaped confessions of Geyser and Weier. I say confessions even though at some points they were speaking to detectives as nonchalantly as if they were ordering coffee at Starbucks. It was legitimately shocking to see how divorced from reality they were. Somehow, they had worked it into their heads that to become the Slenderman's “proxies”, they had to kill their friend. If they didn’t, he would come after them and their families. 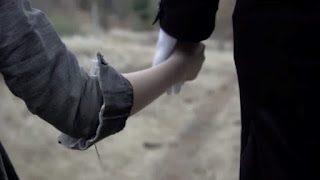 There's another frustrating angle to this case, in how law enforcement initially handled things. During their first few hours in police custody, the parents still thought their children were missing and interviews were conducted in complete secrecy. I mean, how is it possible that a twelve-year-old can be interrogated without some sort of counsel present?

I've been ingesting a lot of stories about people trying to prove their innocence recently (Making A Murderer, Serial) so it was a eye-opener to see the other side of the scale. Though, regardless of the obvious guilt in this case, you still have to ask yourself how something like this happens. I know Geyser and Weier parents are. Brodsky talks to them a lot (the victim and her family declined to be interviewed for the doc) and I feel for them. They were not neglectful parents. In fact, all signs point to them providing perfectly stable environments. 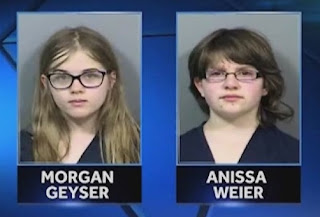 Brodsky describes the circumstances as a “perfect storm.” They were two impressionable kids that together created a kind of psychological dead zone. Judging from their testimonies of the hours leading up to the incident, it almost seems like neither wanted to actually go through with, but neither would back down. It’s all very tragic. Ultimately, the real victim here is Payton Leutner. She was stabbed nineteen times, but still managed to survive. She’ll have to live with the trauma her entire life, one that by some miracle she still has.


Beware the Slenderman illicited several responses, but chief among them is sadness. Lives have been forever changed. The detrimental effects of our increasingly connected society is a discussion for another day, but it was an undeniable factor here. Beware indeed.
Posted by Jay Clarke at 5:00 PM