Three hundred! Wow, that crept up. I don't have anything particularly special planned, but I did want to call attention to some film lists I have found in recent weeks.

On Her Majesty's Bloody Horror. 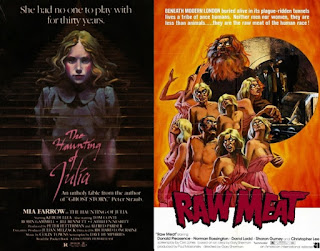 The two above are highly recommended, as Full Circle (1977) is deeply haunting, and Donald Pleasance (the Pleasance family are featured in three titles on this list) puts in a playfully eccentric performance in Raw Meat (1972).


I came across an old post from Taste of Cinema titled 15 Essential Films For An Introduction to Italian Giallo Movies the other day. And it's pretty ace.


I must admit there's a part of me that clicks on these lists waiting to disagree. In this case though, it was almost as if I'd picked them myself. Not only were the right films of the Holy Trinity chosen - The Bird With The Crystal Plumage (1970) & Deep Red (1975) for Dario Argento, Blood & Black Lace (1964) & Bay of Blood (1971) for Mario Bava and Lizard In A Woman's Skin (1971) & Don't Torture A Duckling (1972) for Lucio Fulci - but also some lesser known titles like Sergio Martino's My Vice Is A Locked Room and Only I Have The Key (1972, featuring the impossibly beautiful Edwige Fenech) and Pupi Avati's The House With Laughing Windows (1976). 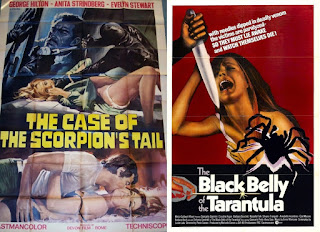 This list is a glorious place to start if you're interested in Euro-horror and/or tracing the roots of the American slasher. I think the only title I'd have tacked on there would've been Martino's Torso (1973). Granted, it's decidedly closer to a slasher than a giallo, but you could say the same thing about Bay of Blood, as well.


Regardless, props to Hossein Eidi Zadeh for a great list that you can check out in full here.

As Time Goes By.


About a month ago, ScreamingVegetable over at Imgur put up an exhaustive Best Horror Film By Year list. The most interesting thing I realized while going through it was how much things got muddied after 2001.

Aside from obvious picks like Let The Right One In in 2008 (nothing even came close that year), there were some really contentious choices. I really hope that SV just forgot about The Descent, because there is no rationalization that The Devil's Rejects wins 2005. I would argue that The Descent would top a list by DECADE, let alone by year.


But I digress, take a look and decide for yourself.


To close things out, I also wanted to let you all know that Perturbator released their new album The Uncanny Valley. Check it out!

Thanks for these lists. Good content that you put out for free (no tip jar?). I haven't seen movies from the Giallo oeuvre, so if there's something to be found on Pirate Bay from this list I might check out a few. Don't suppose Netflix streams these types of movies? Here in the US at least, there's Shaw Brothers' films, so sometimes the service does carry hard to find titles.

I saw your post awhile back about Life Is Strange. After some looking around I found it on Steam, so that I could d/l it to my laptop. It really does expand on the concept laid out in the Walking Dead video game from Telltale. On first play, the choice based storytelling does give the impression that you are in an expansive reality and making your own choices with believable consequences. Don't know if that would hold up on repeated plays, but I might not do it over again. It's too bad about TWD series, while the second installment from Telltale was ok it wasn't essential or engrossing as the first one; the Michonne mini game was pointless so I am not optimistic about TWD 3.

I picked up Last of Us today from Wallyworld for ten bucks, PS3 version. I'll have to dig my console from storage one day and fire this up as the reviews are uniformly positive. Don't have much time for games or TV so I only do it if it's going to be worth it. Maybe Heavy Rain too? https://youtu.be/0t0uCWjQ6Og

No, I don't suppose many giallos would show up on Netflix. A bit too obscure for their algorithms I expect. Have you tried Shudder? It's a new horror channel streaming service.

Yeah, I liked the TWD game a lot, but never the finished the second one. I think my brain got to a point where I could no longer watch terrible things happen to that little girl anymore. The Last of Us is amazing, a must play. I think that Naughty Dog are the best storytellers out there now.

I had a great time playing Heavy Rain, but now it may seem a little dated. I would recommend Until Dawn when/if you get a PS4.