The Haunting of Julia.

In addition to the over a hundred new films that are, in some capacity, premiering at Fantasia, the festival also has several retro screenings programmed. One of these was Richard Loncraine's 1977 film The Haunting of Julia. 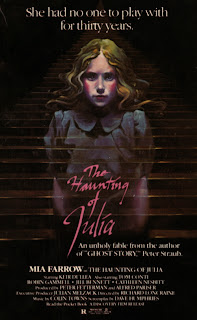 Still mourning the sudden death of her daughter, Julia (Mia Farrow) moves to London to start over. Things go from bad-to-worse when she starts seeing the ghosts of children in and around her house.

Surprisingly, I'd never heard of this film, but I'm glad I took a chance on this. It is refreshing to know that no matter how old I get, there are always titles from my favourite eras (the seventies & eighties) that I still have yet to discover. The Haunting of Julia is a solid example of the kind of filmmaking that was going on in the seventies. It is steeped in atmosphere and, by way of slow, deliberate pacing, uses its characters to tell the story.

Farrow is front-and-center here and she does a fantastic job. She makes dazed confusion an art form, adding a sad and catatonic layer onto her similar award-winning performance in Roman Polanski's Rosemary's Baby nine years earlier. I have no doubt that she was the first choice when it came time to adapt this novel by Peter Straub. She was backed up well by Keir Dullea (of 2001 & Black Christmas, another seventies horror staple) as the domineering estranged husband, Magnus and Tom Conti as her best friend and confidant, Mark.

A real standout is the score by Colin Towns. Even after the details of the film may have faded from my memory, I'll always be able to recall at least a few sections of the music. Towns has equal ability to keep you on edge with subtlety, as well as crescendo to where it seems like his score is the only thing onscreen.


It was unfortunate that the print they had available for the screening was a little weathered. There were moments where it was so dark, that it was almost impossible to see what was going on. Also, some of the sound effects were very deep in the mix, which lessened the punch of some key moments. Of course, these are minor quibbles and are only of note due to the film being so much about atmosphere.

This screening at Fantasia was part of a four-film programme celebrating the launch of Montreal cinephile Kier-la Janisse's new book, The House of Psychotic Women. Taking its name from a 1974 Spanish horror flick, it is a study of female insanity in film. The other screenings in the series were Possession – which I watched a few weeks ago, as part of my Time Out List duties – Christiane F & Dr. Jeckyll & His Women.


Though it is shocking that this film is not more well known, there are superior films that deal with the same subject matter. The Changeling and Don't Look Now both tread on the same ground, yet more adeptly keep the viewer at arm's length. The story in The Haunting of Julia is fairly straightforward, but still succeeds because of competent talent and direction.

I was very glad to have seen this almost forgotten film on the big screeen. It has never, to my knowledge, enjoyed a decent release on video and is a prime candidate for remastering.
Posted by Jay Clarke at 12:00 PM