The second episode of The Walking Dead game FINALLY released last Friday and I devoured it like a, well… you know. 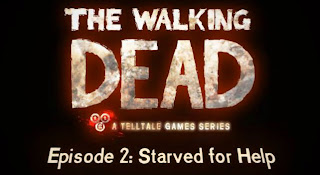 With Starved For Help, Telltale continues its compelling gaming experience, proving that the first episode was no fluke. The story remains engaging, the characters are all impeccably voiced and you feel that your actions really affect the outcome. I find myself continually impressed by the level of immersion here. There was always an underlying sense of dread, even while just walking around camp. I never knew when I would be called upon to make a split second decision that would have repercussions down the line. Perhaps most surprising though, is the relationship this game has built between your character (Lee) and Clementine, the young girl he met at the beginning of the game.

There is a real bond between these two. I find that, more often than not, the decisions I make are based on her welfare, and not my own. It’s very strange that a video game could make me act this way, but maybe reading ninety-plus comics of Rick looking out for Carl have rubbed off on me. I think the moment this was hammered home was during one quiet moment where Lee is pushing Clementine on a swing, and this wonderful piece of music returned from the previous episode. It gave me chills, I'm not gonna lie.


Thanks to SgtCortez15 for uploading this!

The art-style is still great, and there was one particular sequence during the climax – one which I died a maddening amount of times before I figured out what I was actually supposed to do, or rather, not do – that looked fantastic.

The jerky transitions and clunky controls are still a problem, but I have learned to accept them. I guess the only other point of contention is how long we have to wait between episodes. Two months between chapters that can be completed in one sitting is excessive. Wouldn’t it have made more sense for Telltale to have the majority of the game done before releasing it out into the world? If I sound frustrated, it is only because I am really enjoying the product.

Oh well, here begins the long wait until episode three.
Posted by Jay Clarke at 10:00 AM