When I happened to look in on Final Girl last week, I was elated to see that she'd announced another Film Club selection. Not only that, but the film Stacie had chosen this time around was;

Maniac is of special importance to me because it is tied to one of my earliest video store memories. There I was, maybe eight or nine years old, standing with my father in the checkout line, when I looked up and saw this menacing poster tacked up above the doorway. 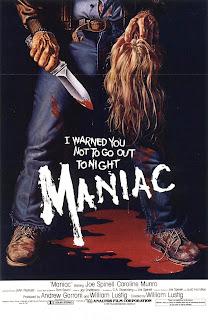 It took me a few seconds to realize that what he was carrying in his left hand wasn't a mop, but a woman's scalp! Of course, rather than be horrified, I had the same reaction I had to most things of a grisly nature at that age. Fascination.

However, it would be many years before I would finally get to watch Bill Lustig's sweat-streaked slasher. Shortly after that first encounter, Maniac just fell off the map, or at least within the proximity of my limited reach at the time. Before downloads, DVD or even big box rentals stores, you basically went to your local store and rented whatever they had. For whatever reason, there were a handful of titles that never made it to the suburbs. I was almost of age, when I finally saw The Evil Dead for the first time, for instance. Anyway, Maniac will always stick with me as having one of the most iconic coverboxes of the home video era. And what a bonus that, when I actually did get my hands on it, did not disappoint.

Despite being released in 1980, smack dab in the middle of the American slasher boom, I think it stands out for a few reasons. First, while most slashers concerned themselves with masked assailants, Maniac's Joe Spinnell put a human face on the killer. Apart from all the heavy breathing, moaning and inner-dialogues, Spinnell as Frank Zito is a fairly functional member of society. If you never saw the inside of his apartment, you'd think him a quiet and well mannered man. While I will say that love interest Anna (Caroline Munro) is perhaps one of the most trusting individuals I've ever seen in a horror flick, she had no immediate reason to run in the other direction either.

Secondly, Lustig doesn't confine his story to a summer camp or a small town, he gives his characters an entire city to toil around in. He, much like Larry Cohen, makes New York City an integral part of his movies. You can almost smell 42nd Street.

Then, there is the tone. This is not played tongue-in-cheek, as Maniac is gritty, sleazy and mean. Some of the cat-and-mouse sequences have real intensity, the most pitch perfect being the subway sequence. I'm sure those with a keen eye noticed that director Alex Aja – who coincidentally produced the upcoming Maniac remake – cribbed the bathroom scene for his own debut, High Tension.

Lastly, and perhaps most obviously, is the gore provided by Tom Savini. Some of the best work of his career, including blowing his own head off with a shotgun, is in this film. You will see Maniac featured prominently in any self-respecting gorehound's collection.

Many thanks to Final Girl for giving me the extra push to post this overdue love letter to Maniac.
Posted by Jay Clarke at 7:30 AM

I haven't seen the original Maniac. From the looks of it, he only kills chicks. Does this mean that Elijah Wood won't be killing Macaulay Culkin in the remake? I've been waitint for it since The Good Son.

Wow, good call on Aja recycling the bathroom scene in High Tension. I didn't catch that myself but you are so right. It's ultra harrowing in both films.