The next film I watched on the Time Out Best 100 Horror List, was the 1955 French film noir Les Diaboliques. 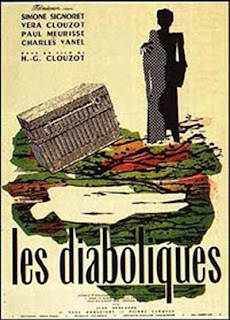 An evil headmaster’s wife and mistress conspire to kill him, but the plan goes awry when his body disappears.

My knowledge of films from the fourties & fifties is rather limited, so perhaps the best thing about the Time Out London list is that I’m ingesting a lot of these old silver screen classics.  The minimalist nature of these films is reacquainting me with the fundamentals of filmmaking.  That is not to say that similar minded films do not still exist today, but the type of storytelling utilized in this film is certainly no longer commonplace.

Les Diaboliques - or Diabolique as it known domestically - is a wonderfully crafted thriller.  I can understand why Alfred Hitchcock pursued the rights to this story – director Henri-Georges Clouzot apparently beat him out by mere hours – because it falls right into his oeuvre.  It is a film that is almost entirely dialogue driven and the three main characters are simplistic, yet wholly engaging.  Michel Delasalle (Paul Meurisse) is instantly unlikable and you immediately believe that the two women, who by all accounts should be bitter enemies, would conspire to off him. By herself, the frail and sheepish Christina (Véra Clouzot) would’ve never acted on her impulses, but combined with Nicole’s (Simone Signoret) cool and calculating nature, they become a deadly pair.

In addition to the narrative, I thought the film was visually impressive, as well.  The use of shadow, especially in the last act was highly effective and that shot in the bathroom during the climax was one for the ages.

I am sad that I spoiled the ending for myself by seeing the 1996 remake when it came out in theatres.  That was during the tail end of my obsession with Sharon Stone, so that’s all I have as an excuse.  I love the closing title card of Diabolique imploring the viewers to keep the ending to themselves

Now, as I said, I haven’t seen a lot of films from this era, but this one seemed very risqué.  Seeing Clouzot walk around in a very thin nightgown, coupled with themes of domestic abuse and implied statutory rape were not things I was expecting.  I am aware that the whole essence of film noir was a backlash toward the popular sugarcoated fare of the day, but I was still taken a little aback.

Diabolique is another check mark in the win column for the Time Out List.  What's next on the roster?  Well,  I do believe it will be Robert Wise’s 1963 flick The Haunting.
Posted by Jay Clarke at 12:30 PM