The first of two Toronto After Dark's summer double bills kicked off last week. I'd already seen Juan of the Dead at TIFF last year, but was very much looking forward to Nicholas McCarthy's haunted house indie The Pact. 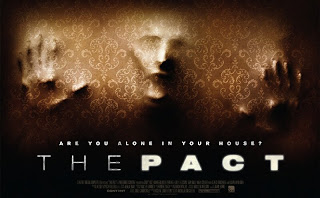 Annie (Caity Lotz) returns to her childhood home after her mother's death, only to find that it may be haunted.

I knew relatively nothing about this movie going in, and was pleasantly surprised. TAD continues its burgeoning reputation for programming solid indie genre flicks, as The Pact is just that. It is a mix of many influences, but never too overtly to feel like a copy. During the director's video intro before the film, he gushed about his love for the works of John Carpenter and Dario Argento and one can clearly see that within.

This film shifts several times, but is never jarring. The first act, focusing on the relationship between two sisters, reminding me a lot of Absentia, then drifted into a supernatural mystery using atmospheric scares mostly reserved for the J-horror set. Then, it one-eightied again, as the back half of the movie emulated that of a giallo. This delighted me as there are far too few directors that revel – and I mean revel, as in going beyond aesthetic and actually using the constuct – in this type of film anymore. I think what may have really elevated this film for me though, is the extra layer it adds during its climax. In true giallo fashion, the logic wanes, but in the context of the film I think it's extremely effective.

This film is also incredibly well shot, with great performances all around. Lotz's portrayal of Annie really keeps the viewer grounded during the more paranormal moments and it was good to see Caspar Van Dien wander in as a grizzled detective, as well.

If The Pact has a negative, it is the last two minutes of the film. It feels very tacked on, and clearly derived from the director feeling he had to close with some sort of “boo” ending. It was painfully unnecessary, and ends the picture on a down note. This doesn't however, ruin the film as a whole and McCarthy should be very proud of what he has created here.
Posted by Jay Clarke at 1:14 PM