Last on my list of movies to see this year at Fantasia was the Argentinian ghost flick Memory of the Dead. 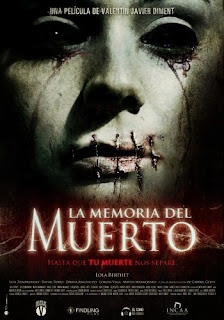 After the death of her husband, Alicia (Lola Berthet) calls all of his closest friends and relatives back to his mansion for a special wake. However, Alicia has something more sinister planned and when the clock strikes midnight, all hell breaks loose.

I was back and forth on this film as I was watching it. Although director Valentín Javier Diment does a lot with his small budget, there were a few things about this production that never gelled with me. This is a huge shame because the idea was something I could have sunk my teeth into.

I think it mainly comes down to the choice to shoot the film digitally. Diment was clearly influenced by the gialli, as filmmakers like Dario Argento and Lucio Fulci were all over this film. The problem was that there was something very off putting about seeing that aesthetic in HD, instead of its native 35mm. The closest thing I can liken this to is the “uncanny valley” effect of video games or visual effects, where something is the same, but slightly different, so you're brain rejects it. I have no doubt that if Cattet & Forzani's 2009 giallo Amer had been shot digitally, I would have felt the same way. Memory of the Dead still had a very colourful and unique look, but was nevertheless often distractingly obtuse.

The setup was handled well enough, with Diment briskly introducing the seven or eight characters that are gathered together. The transition into the meat of the picture seemed a little shaky, as rules are quickly established and then broken. I think where the film had me the most was when it was skipping around, showing all the different ghosts that the characters encounter throughout the house. The cast was very good, but I found that almost all of them were unlikable in some way. When the one character I had latched onto was offed, I pretty much lost all connection to the piece.

A lot of people have likened Memory of the Dead to Evil Dead 2, but - apart from two key moments - I'd say it more resembles the first few Dark Castle films, House on Haunted Hill & 13 Ghosts. Even then, I don't think its mix of CG and practical was handled as well as those two films. Diment loads most of his makeup effects in the back half of the movie for some reason, where an even spread may have been more effective. 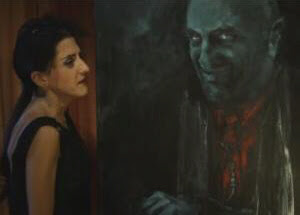 Having said all that, I did like the ending, which was a small victory I suppose. As I indicated, I was never completely out of it, but never fully onboard either. Although I am well aware that the adoption of digital was probably a budgetary decision, I feel the money saved does not equate to the damage done to the finished product.
Posted by Jay Clarke at 12:00 PM