Another reason I love Fantasia is that Montreal audiences adore Japanese splatter flicks every bit as much as I do. The screenings are always lively and the directors of such fare, like Noboru Iguchi & Yoshihiro Nishimura are treated like rock stars. Every year, they trot out their newest offerings and I somehow, as if pre-ordained, always seem to be there to smear them into my eyeballs. This time around, Iguchi had two new ones. 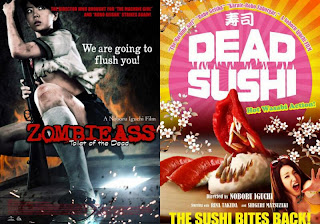 Let us start with Zombie Ass: Toilet of the Dead. I don't think a synopsis is even necessary here, as this is one of those occasions where the title says it all. Then again, Sushi Typhoon's wares, like Machine Girl and RoboGeisha, have always been designed to sell themselves by concept, haven't they?

So yes, Zombie Ass delivers on its title. The movie has zombies, and it has ass. A lot of ass. In fact, one could fashion a drinking game based on onscreen butts and quickly find themselves on the floor. As you may of guessed, the movie is heavy on the toilet humour, with puke and feces flying at every opportunity. It is definitely the grossest of Iguchi's oeuvre, and that's saying something. Iguchi must be one persuasive cat to be able to get his actresses to do some of the stuff they do here.

Apart from all that though, Zombie Ass still showcases some insane creativity, peaking with the wonderful creature designs of the final boss battle. And seemingly channeling 2005's Meatball Machine – which along with Versus & Death Trance may have been the genesis of this movement – Iguchi also throws in some probing tentacles for good measure. Zombie Ass is retarded and silly, and I wouldn't have it any other way.

The very next day I was back for more with Iguchi's Dead Sushi. I was really looking forward to this one because it stars Rina “High Kick Girl” Takeda, and it did not disappoint. This is probably Iguchi's best film since Machine Girl.

Naturally, it is Takeda that makes the movie. She not only has screen presence, but also allows the emphasis on martial arts to be dramatically increased. Takeda is as deadly as she is adorable. I mean, this is an Iguchi venture, so there are still some gross tangents, like the “Japanese kiss” sequence, but nothing approaching the stuff in Zombie Ass.

And once again, the crazy ideas flow like soy sauce, as an egg sushi sidekick, a battleship made of salmon roe – which Iguchi later revealed was inspired by Peter Berg's recent Hollywood blockbuster – and the fantastic final fight sequence featuring the main villain Tuna Head all delighted those in attendance.

Dead Sushi is rampant with cheesy CG, but for some reason, it didn't bug me as much as it did in RoboGeisha. I think that because Tuna Head was all done using practical effects, I felt it was a fair trade off.

I am generally not a fan of audience participation, but in this case I thought it genuinely added to the experience. During his intro, Iguchi instructed everyone to yell out “Danger” and “Sushi” at certain points during the flick, which was happily obliged. Speaking of the intro, here is some delighful video of Ms. Takeda showing off her signature move.

As the novelty of Japanese splatter fades from some markets – I'm looking at you Toronto – I know that Fantasia will always be my last bastion to revel in the bloodied schoolgirls and nightmare creatures of Iguchi & his like-minded brethren.
Posted by Jay Clarke at 10:00 AM