As promised, the next film I watched on the Time Out Best 100 Horror List was Robert Wise's 1963 film The Haunting. 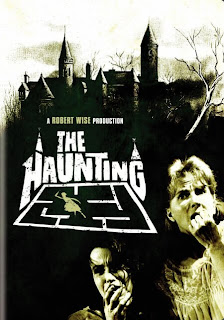 Dr. Markway (Richard Johnson) brings a group of people together to aid in his research of Hill House, a remote estate long thought to be haunted. It isn't long after they arrive that strange things start happening.

This is another solid pick from the Time Out crew, as I can't fault anything in this film. I thought the cast was perfectly balanced and each role had just the right amount of characterization. The ringleader Markway is clearly led by his passion to document acutal proof of the paranormal, even if means putting his subjects in jeopardy to do it. The one most at risk is the sensitive and shrewish Eleanor (Julie Harris). She is so desperate to get away from her unhappy existence, that she's willing to do just about anything. Luke (Russ Tamblyn) the heir and eventual owner of the estate, is also along for the ride to make sure nothing happens to his meal ticket. Lastly, and most interesting to me, is the psychic Theodora (Claire Bloom). She has a playful, yet devilish nature and takes an immediate liking to Eleanor.

I first I thought I was imagining the lesbian overtones, but as the film went on, I could see there was a definite vibe going on. I found this extremely fascinating because in the early sixties, that must have been scandalous. That is, if it was even picked up on at the time. Now, I'm not naïve enough to think that lesbianism in film began in the eighties, just as I was first discovering it on late night TV in films like The Hunger and Desert Hearts, but I couldn't find many references pre-dating Wise's film. I didn't look too thoroughly – I'm not writing a master thesis after all – but I'd wager this has got to be one of the earliest instances in a genre film. Or at least ones that don't involve vampires.

From here I'd like to move onto the most important component of The Haunting; the house. Now, it is not unique that the haunted house be a character unto itself, but I can't say that it has ever been done better. Black & white is the perfect medium here, as I love the way Wise uses shadows in this film.

I say the only shortcoming (of the DVD, not the film) is the sound mix. This is a film that could really lend itself to the 5.1 treatment, but maybe that's not even an option. I suppose depending on how the sound was laid down on the master, it may not even possible to isolate the different sounds. That would be a shame because the bedroom scene with Eleanor & Theo would really rock in surround, as would much of the film.

Unlike with my experience watching Diabolique, I fortunately remembered very little of The Haunting's 1999 counterpart. I only recall who was in it and that the movie collapsed under the weight of its overbearing CG. I'm glad that I hadn't seen the original at that point because I would've been appalled at its falling so short of the mark. Oh well, even thirteen years on, Hollywood has still yet to learn that digital effects are not scary.

The Haunting is a perfect example of the benefits of simplicity and restraint and fully deserves its spot on the Time Out List – at the impressive slot of 17th out of 100 no less! Well, that's another one down. With only fourteen titles left, I'm going to have to start digging deeper.
Posted by Jay Clarke at 10:00 AM