If They Came From Within!

Even though I spent many hours sitting in theatres during my stay at Fantasia, this long-running festival is not only about the films. There were several other things going that weekend, the most anticipated of which was the opening of the If They Came From Within show. 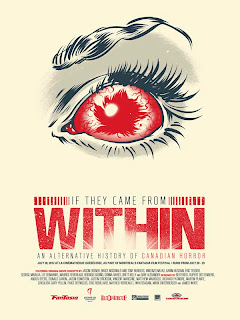 Curated by Rue Morgue Magazine's Dave Alexander, it is an art & media exhibition featuring dozens of Canada's greatest creative minds visualizing an alternate history of Canuck genre film. Filmmakers like Jason Eisener (Hobo With A Shotgun), Vincenzo Natali (Splice) and Lee Demarbre (Smash Cut) were asked to concoct a title & synopsis for a fictitious genre movie. They were then paired with renowned artists like Gary Pullin, Justin Erickson and Eric Robillard to bring them to life. Here below, are some examples.

To see more of the posters in the series, check out Yell Magazine's great coverage here. The show also featured some other accessories, like props and production materials for said films. While searching the Web, I also found some accompanying scores composed by Conrad Simon. The opening party was very enjoyable and I was fortunate enough to talk with director Maurice Devereaux for a good length of time. Truth be told though, it was mainly me gushing about how much I love his movie $la$her$. Also, thanks to the free hooch, I had the courage to introduce myself to Michael Biehn who was also in attendance. He seemed a little embarrassed when I brought up the Near Dark Q&A at last year's Festival of Fear.

The show runs until the 29th, so if you are anywhere near Montreal, I highly suggest you check it out.

In addition to the show, there was also a panel with some of the artists & filmmakers. It was a really interesting affair, which delved into where ideas come from. There was also a lot of reminiscing about old VHS coverbox art, which you can imagine I was totally on board with. Devereaux further proved we may be kindred spirits by telling a story about how he also used to clip out all the newspaper ads for the movies that were playing that weekend.

A few days later, Dave Alexander hosted another panel called A Look That Kills. This was an extremely informative talk about the importance of poster art plays in selling your product. The panel was made up of two filmmakers, George Mihalka (My Bloody Valentine), Casey Walker (A Little Bit Zombie), Anchor Bay marketing head Susan Curran, Calgary Underground Festival director Brenda Lieberman & prolific graphic artist Eric Robillard. What followed was an extremely well-rounded discussion. Mihalka & Walker talked about filmmaking from veteran and novice perspectives and Lieberman and Curran spoke about marketing from both ends of the process. The former is often be the first to see a film's artwork while programming her festival, and Curran usually comes in at the last stage when tweaking the product for its transition into the home video market. Robillard came in on the creative side of things, reminiscing about his experiences – good and bad – trying to give his employers exactly what they want.

Two points that really fascinated me were when Robillard explained how advanced technology has progressed. He showed an example of a cover that he designed and revealed that the only thing in it from the film was the actress' face. He then put up seven separate stock Imageshack pictures – one was of another woman's cleavage! – that were then combined into the finished product. Curran also used a slide show to beautifully illustrate the long process of coming up with the cover for the recent Battle Royale DVD release. She showed about fifteen or so concepts, and said they had settled on one that prominently featured the image below. Then they discovered that they not only did not have the rights to use the kid's faces, but it was also an inadvertent spoiler. 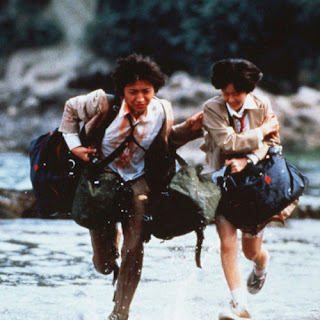 So, they went from that to these two. The first of which, solved the problem of the faces and the second is a nice clean image, which is apparently very important. 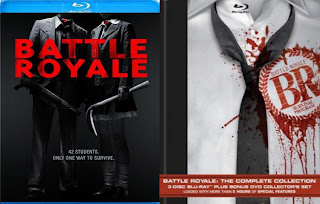 Make no mistake, these marketing people have things down to a science. Everything from which side a character is holding up his gun, to where the price sticker is going to go is considered. I was also shocked to learn that WalMart still has a sixty percent share of DVD sales. That means if your cover is in anyway inappropriate for mass consumption, they ain't carrying it. Which means you're not making your money back. I remember this kind of shenanigans from when I worked at Cockbuster. The blue-and-yellow had so much power back then they could actually order directors to make edits to their films. This would be begrudgingly obliged because if Ballbuster wasn't carrying their movie, they obviously lost a lot of money. I thought that shit was all behind us, but apparently not.

It was a lot to take in, but I learned a lot that weekend. You can be sure that I'll be making some sort of cover for Orange to accompany any of my further film festival submissions.
Posted by Jay Clarke at 10:00 AM

"I was also shocked to learn that WalMart still has a sixty percent share of DVD sales."

They don't have the Canadian video game market cornered but they do very good business on cheap DVDs. Ever been to a store on a weekend? The dump bin cages in front of the electronics department are were a lot of discs are moved in this country.

I am actually surprised at how expensive they sell new releases. It seems that beginning about five or so years ago, new release DVD prices shot up when bootlegging on torrents became popular. It must be like opening weekend, where a lot of profit is to be made on the first week or so of release, regardless of price.