After being stuck on a train for an extra hour-and-a-half, I finally made my way to the J.A. De Seve Theatre for the Fantasia Film Festival's opening film The Tall Man. 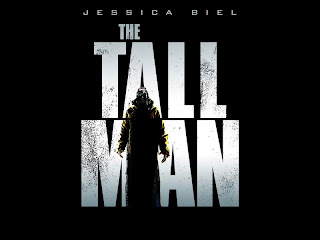 After her son goes missing, Julia Dunning (Jessica Biel) discovers he may be the latest victim of a local urban legend named The Tall Man.

Expectation can be an unforgiving beast, as the buzz on this film after its premiere at SXSW was lukewarm. Pascal Laugier's debut Martyrs was a grisly and disturbing affair, so one would naturally be predisposed to expect something similar for his follow-up. I have to echo festival director Mitch Davis' comments when he introduced the film. He was quick to point out that The Tall Man was not Martyrs, but a completely different animal.

Before I get into The Tall Man though, I should mention the short that played in front of it. Nick Lacelle's Cure was a well done slice of a post-apocalyptic world that was made even more impressive by its tiny budget. Shot in three-and-a half days and costing four hundred dollars, Cure accomplishes more in ten minutes than some other productions of the same ilk do in ninety.

As for The Tall Man, once you wrap your head around what it isn't, I'd say it is a solid thriller. I had a bit of an 'uh-oh' feeling at the beginning because there was something very television about it. It possessed a certain look and the opening credits sequence felt like something you would see on a trendy show like The Walking Dead or Harper's Island. Then I realized it was because it was shot in Vancouver and I was flashing back to the early X-Files episodes I devoured in my twenties. Speaking of which, it was great to see Bill “Smoking Man” Man again, as he appears as the town sheriff.

As I said, The Tall Man is not Martyrs, but that's not to say it doesn't feature some morose subject matter. Laugier is an extremely skilled filmmaker and always in control. There were a few times that I thought the movie might be coming off the rails, but he always managed to reign me back in. Though it is clearly shot in Canada, the film itself often recalled the French New Wave. The isolated locales and superb production design reminded me of Moraux & Palud's Ils, and there was also an excellent midnight van chase ala High Tension.

I think the real standout of The Tall Man is Jessica Biel. She gives a really strong performance here, particularly with a monologue that she delivers toward the end of the film. Nothing I had previously seen of her gave me any indication that she was capable of something like this, so that was a nice surprise. The only glaring negative of the movie is the length. It doesn't have an excessive running time, but it is one of those movies that seems to have six or seven endings. With each new scene it faded to in the last fifteen minutes, I felt the piece diminished as a whole. I'm all for tying up loose ends, but this seemed excessive.

The Tall Man, though flawed, is a very functional thriller. As the trailer would suggest, Laugier has made something a little more commercial, but he still manages to retain his dark edge.
Posted by Jay Clarke at 10:00 AM