In celebration of Women In Horror Month, I took the opportunity (thanks to Shudder) to watch Ann Turner's 1989 film Celia. 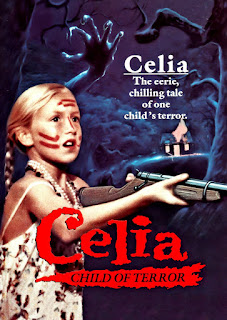 A young girl named Celia (Rebecca Smart) tries to cope with the chaotic world around her after the death of her grandmother.

This was a title I'd been meaning to see for some time after reading about in Kid Power! Fortunately, I remembered very little about it other than it was Australian and featured a little girl who may or may not be a psychopath.

I was a little blown away by this movie to be honest. Even though its label as a horror film is not really accurate– it's actually more of a coming-of-age drama – there are indeed parts of this movie that are like waking nightmares. Celia may seem mild at the onset, but I guarantee there were kids in Oz that saw this in eighty-nine and were scarred for life.

As you know, I gravitate to stuff where the child's perspective blurs the line between fantasy and reality. It's the crux of Guillermo del Toro's best work and another of my faves, Bernard Rose's Paperhouse. I'm also always interested in movies that portray places and periods I have little knowledge of. Nineteen-fifties Melbourne, with its equal intolerance of communism and the rabbit infestation, is as poignant then as it is now. It's funny how prejudice and persecution never seem to go out of style.

The performances are solid top to bottom, but most of the praise needs to be heaped on the young lead, Rebecca Smart. There is a tendency in films about off-kilter children to play the role with a cold and/or sharp malevolence (Patty McCormack in 1956's The Bad Seed and Isabelle Fuhrmann in 2009's Orphan are two good examples), but Smart plays it completely straight. Apart from being understandably withdrawn after the death of her grandmother, she is pretty normal and even incapable of lying in the first half of the movie. It seems to me that her darker actions toward the end were almost reactionary, rather than malicious.


Director Ann Turner's confident direction is exceptional and her characters well written with equal importance given to both genders, even in a time when that wasn't the case. I was incredibly impressed with this movie and the more tragic sequences hit me like a ton of bricks. Celia may not be a horror film, but it affected me more than most straight up genre flicks made these days.
Posted by Jay Clarke at 10:00 AM