I Wonder If Its Death Proof.

I was driving yesterday afternoon and I could have sworn I saw a large black car blow by me with some very familiar markings on it. I thought about turning around to persue, but didn't. Tonight after hockey, I pulled into my local Tim Hortons for some milk (because every gas station, grocer and convenience store around my house decided to close early apparently) and what do I spy parked out front? 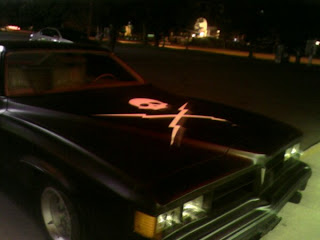 When I went inside and inquired, I found out it actually belongs to an employee. I was told it's a 1976 Pontiac Le Mans (Stuntman Mike's car was a 1970 Chevy Nova) and I was one of only a few people that have recognized the Death Proof markings. I sometimes forget just how poorly Grindhouse did at the box office. Sorry for the picture quality. Not only did I have to snap the pic on my shitty phone camera, but I was also hurried because it was just starting to rain.

Wow Wow Wow!!! That's awesome. I want something like that!

Oh what? You're too good for Timmy's over there in Calgary?

Nope, all the Canadians drink it. I went there once after hearing rave reviews and it was terrible!

Regardless, I'm a snotty English kid who's used to good service and tasty service. What do I know?!

I go there for the Orange Pekoe. That's it! You're out of the will.

It is very interesting for me to read this post. Thanks for it. I like such themes and anything connected to them. I definitely want to read more on that blog soon.
Alex
Cell phone blocker