The Fourth Kind follows Dr. Abigail Tyler as she investigates strange occurrences in the small town of Nome, Alaska circa 2000. The movie cuts between her actual video & audio recordings and dramatizations with Tyler being portrayed by actress Milla Jovovich. 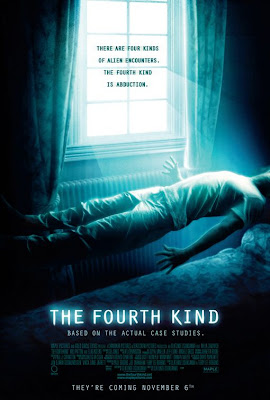 The Fourth Kind should have been a slam dunk, as the premise is terrifying. Beings come into your room at night and take you away to do God knows what, and the worst part is you can't even remember it. So, you are now a shell of a human being because fundamental parts of you are missing and distorted. Ultimately though, you know what my biggest problem with The Fourth Kind was? I just didn't buy it. This production goes to SO MUCH trouble to make you swallow that this stuff happened, with all the archive tapes and grainy video footage and I just didn't believe a word of it. This video 'proof' is difficult to buy when anytime something interesting happens, the camera goes all wonky, so you can kinda sorta see something. I mean geez, the only time we are privy to a UFO in the movie, I didn't even see it until it was pointed out again with a circle and arrow at the end of the movie. I'm all for not shedding light on the monster, but eventually you have to give us something. The sound is certainly effective, but that can only take you so far. Shit, the end credits sequence of recordings taken of people relating their encounters is more unsettling than the movie itself. How sad is that? 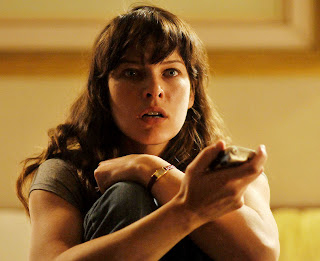 Zombies are WAY easier to deal with.

Now, I LOVE Milla Jovovich – in fact I have a theatrical viewing streak going of her movies that is now at seven – but she can only do so much with the material here. The director's use of split screen at certain points is definitely interesting, but again because it's all bollocks, it didn't resonate with me. I wonder if it would have been more effective if they had just gone one route of the other. Without Milla involved, The Fourth Kind never would have got me into the theater, but if it was all Hollywood, the movie likely would have been even more flat than it already was. I might just be that The Fourth Kind is a little late to the party because the days where pop culture was abuzz with abduction theories died with The X-Files – which itself was largely crippled by 9/11. This would also fall in with how a similar movie called Fire In The Sky was received in 1993. It was largely panned by critics even though being a solid film in my opinion, but since alien abductions would not hit the mainstream for another year, perhaps it was too ahead of the curve. To be honest, I don't think The Fourth Kind works on any level, just because it hinges on the fact that you believe and the infrastructure they build for that is just too flimsy.

The owls are not what they seem.

The Fourth Kind was a swing and a miss for me, but I'll move on without a scratch. And my Milla film streak will continue as my ten bones for Resident Evil: Afterlife is already set aside.
Posted by Jay Clarke at 9:44 PM

Shame, not yet seen it but this was supposed to be the second of a thrilling double bill of horror films to watch last weekend. I ended up only watching the first of the double bill - which was Paranormal Activity - which I enjoyed, even though it wasn't a patch on Blair Witch.

I'm currently watching this with my family. It's such bullshit. Honestly it could have been more terrifying if it was on demonic powers that happened after a traumatic event . It'd be realistic and haunting. Also the distortions on the "evidence" would make more sense. Clearly this "evidence" is fake. As someone who can't even watch "Signs" this movie is boring! And the voice just said "I am god" which would have a hell of a lot more power if this movie was on demonic possession.