I took a little time this week to read Robert Englund’s book Hollywood Monster. In it, Englund reminisces about his career, which has spanned four decades. 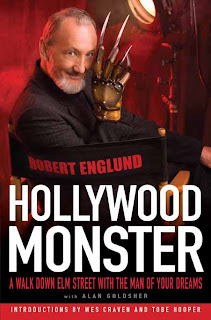 The book starts with forwards by horror legends Tobe Hooper and Wes Craven as they both speak of when they first met Englund and each chapter begins fittingly with the actor sharing a nightmare – either recurring of a one-off – that he has had. Hollywood Monster is a wonderfully brisk read. I burned through it in a few sittings and the smile rarely left my face while doing so. This is a man who loves what he does. He may have initially fallen into local theatre to meet women, but it became clear early on that he was actually good at it. In fact, the impression I got from Englund’s book is that roles were pretty easy to come by for him. And if, for some reason, he was passed over for a part, he stuck in the minds of casting directors and was referred for something else – which was how his audition for A Nightmare On Elm Street came about. I suppose its probable that Englund omitted his more painful rejections to keep things light. 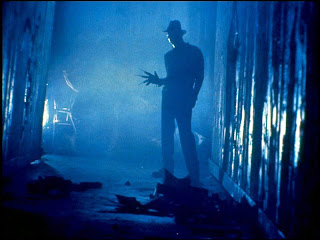 Considering that Englund is best known for his role as Freddy Krueger, I was surprised to find that I found the first half, covering his pre-Nightmare career, the most engaging. Hearing his anecdotes about hanging out with Mark Hamill and indirectly influencing the careers of Andy Kaufman and George Wendt were really interesting to me. And I loved hearing about his experiences playing Willie the alien in V. I’d almost forgotten what a phenomenon that show was in the eighties. It certainly gave Englund a taste of what worldwide fame would be like. That’s not to say the large chunk of the book that covers his career as Freddy isn’t fascinating though. If anything, the tale of his first interview with Wes Craven about Nightmare is one of the best of the bunch. As the Nightmare movies wind down, so does the book, as he doesn’t go into too much detail about some of his other roles, like his turn as The Phantom Of The Opera in 1989 and his re-teaming with Tobe Hooper for The Mangler in ‘95. Hollywood Monster ends with a series of appendix, which cover a lot of Englund’s (and Freddy’s) favourite films, songs and other little tidbits. 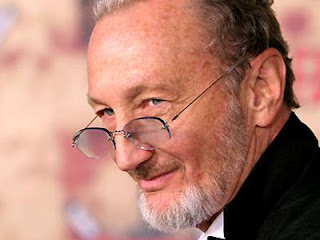 The Man Behind The Makeup.

Englund is a consummate professional and it shows through clearly in Hollywood Monster. It is also apparent that he loves working with up-and-coming directors, as proven by his roles in Behind The Mask & Jack Brooks: Monster Slayer.

“Audiences know when you are relying on CGI because your story sucks and the scares aren’t there. And I think their frustration led to nostalgia for good old blood ‘n’ guts and cheap thrills. Fortunately, a generation of young filmmakers – Eli Roth, Adam Green, Scott Glosserman, Tim Sullivan, to name a few – understand this and look to Tobe Hooper and John Carpenter for inspiration, rather than their Mac Pro.”

Hollywood Monster works because Robert Englund is a good storyteller. His style is conversational, full of whimsy and he’s not afraid to be self-deprecating, much in the same way fellow genre actor Bruce Campbell is. What I think I respect him for the most is that he accepts, even embraces the fact that he’s been typecast as a genre actor, as he says, “stumbling into this world was a happy accident that gave me a wonderful career”.

That’s the mark of a class act as far as I’m concerned.
Posted by Jay Clarke at 12:33 PM