Horror On The Tube: Summer/Fall '09

There's been some happenings on the small screen since I last spoke about it. Here's a last-half of the year rundown.

The second season of True Blood kicked off last June and was a pretty entertaining ride. The show’s universe expanded to include a few more creatures of the night and we finally found out what the deal was with Maryann (Michelle Forbes) and her pet pig. Whereas the first season focused more on Bill’s origins, the second shone some light on Bill’s sherriff Eric (Alexander Skarsgård). The storylines of Jason's time with The Fellowship Of The Sun and Bill's charge Jessica (Deborah Ann Woll) adjusting to being a vampire were also highlights of this season. I think my only real disappointment was that with all the hype around Evan Rachel Wood joining the cast, she didn’t arrive until the eleventh episode. The conclusion was pretty abrupt, but at least it ended on a decent cliffhanger. 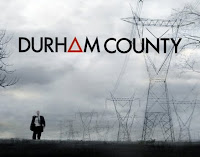 Durham County was a six episode Canadian TV series that came and went in 2007. I was pretty impressed with it at the time, as it well above the quality I was used to seeing from most Canadian-made productions – and a hell of a lot more edgy too. The way the show ended, it seemed like there was more story to be told, but there was no mention of anymore episodes for quite sometime. That is, until a new run of six episodes began in July. Picking up a year after the events of the first season, Mike Sweeney (Hugh Dillon) is now a Staff Sergeant and even though he's supposed to be behind a desk, still manages to get into all sorts of trouble. Michelle Forbes plays police shrink Pen Verrity and ho boy, if you thought she was fucked up in True Blood, you ain't seen nothing yet. I felt the first three episodes were really strong, but it seemed to taper off from there on in. That's not to stay it wasn't still engaging TV though. There is stuff that was setup in the first season that is finally elaborated on and by the end I was just glad that the real GTA* is not like the one represented in the show. I hear there is a third season in the making and I'm glad because Laurence Labeouf... let's just say I'm a fan. 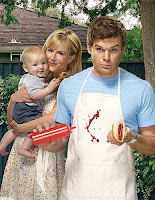 When I heard John Lithgow was joining the cast for the fourth season of Dexter, I was very weary because I can’t stand him. I’ve always thought he’s a total ham and don’t get me started on that retarded excuse for a sitcom he was on. However, in this, he did a bang-up job. Uncharacteristically reserved and ultimately creepy, he stood toe-to-toe with Michael C. Hall. Their scenes together were just as good (if not better) as his exchanges with last season’s nemesis Miguel Prado (Jimmy Smits). Most of the other storylines were solid as well. Detective Quinn (Desmond Harrington) got a love interest, and Deb (Jennifer Carpenter) inched ever closer to finding out the truth about her brother. Most notable though, was how fucking dark this season was. I’d viewed Dexter mostly as entertainment up until now, but there was some stuff that happened this season that disturbed me deeply.

And that's pretty much it. And for the first time in about fifteen years, I have a gap where I'm not watching at least one show. Dexter, Curb and Californication have ended, and Lost and Burn Notice don't start for another month or more. I guess it's time to dig into those BSG episodes that DirtyRobot lent me, so I can see what all the fuss is about.
*GTA stands for Greater Toronto Area for which Durham is a part.
Posted by Jay Clarke at 10:02 AM