As I mentioned yesterday, I had a few people over on Saturday for the express purpose of watching one of my newly acquired Blu-rays, Richard Stanley’s 1990 sci-fi horror flick Hardware. I have to give big props to Severin Films for finally releasing this movie, as up to this point it was only available in its grainy, hard-to-find 1993 VHS version. 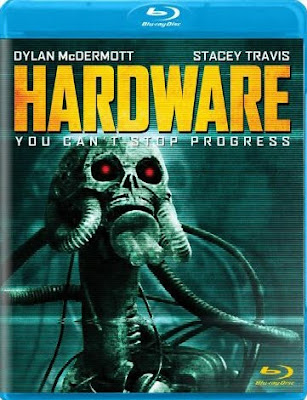 Set in a crumbling metropolis of the future, scavenger Moses (Dylan McDermott) brings home some scrap metal for his artist girlfriend Jill (Stacey Travis) on Christmas Eve. Unfortunately for her though, this ‘scrap’ is actually pieces of a junked military droid, which comes to life and starts hunting Jill in her own apartment.

Considering it has been over fifteen years since I’d seen it, I was actually surprised by how much I remembered. From the smog-filled landscapes to Jill’s slimy neighbour – you can never forget a line like ‘yeah baby, squeeeeze that tube’ – to the unstoppable M.A.R.K. 13 robot, all this stuff left an indelible impression on me. I think Hardware is grass-roots science fiction at its best. After watching the film again, I was amazed to find out that it was made for just under two million dollars. Sure, it is a primarily one-location piece with a small cast, but everything about it seems so heavy and dense. The attention to detail really makes you think this world exists. That is in no small part due to Richard Stanley’s vision. He has only made a few films in his career, but anyone who has seen them knows he has a distinct style based around colour, specifically reds and desert tones. 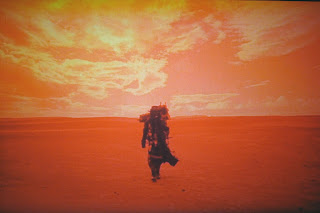 I really can’t stress enough about how crisp and clean this movie looks on Blu-ray. One of the reasons I was so looking forward to seeing this again was that I have distinct memories of not being able to tell what was going on in the darker sections of the film. This is so not the case here, as the best thing about this new transfer is that you actually get to SEE all the fantastic production design. Simon Boswell’s score, which is a mix of synth and acoustic guitar, fits in beautifully, as does its signature song, Public Image Ltd’s “Order Of Death”, a tune so catchy, that I don’t think it has ever left my brain since.

Hardware is a lot gorier than I remember as well, but I’m beginning to wonder if the VHS that I saw way back wasn’t cut, as that was often the case at my old video store. Another great thing about Hardware is that it is not content to just be a standard sci-fi horror. There is a lot of political subtext in this movie that obviously went over my head as a teenager, but is blatantly obvious now. The only real negative I could pose is that the third act kind of drags a bit, but since there is so much to look at in this movie, it never bores. 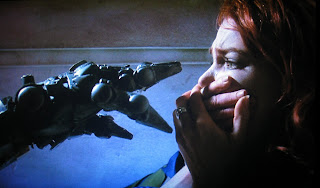 As for the disc itself, it would have been easy for Severin to just put the movie on there, but they went the extra mile and included tons of supplemental material, as well. There is a wonderful documentary on the film called No Flesh Shall Be Spared that is almost an hour long. In it, Stanley – along with several other members of the cast and crew – talks at length about growing up in South Africa, his influences – that include Argento & Bava, which makes his whole colour palette thing make so much more sense now – and how the look of the M.A.R.K 13 came from a dream. Also on the disc, are three of Stanley’s short films, one of which is Incidents In An Expanding Universe, an ambitious Super 8 film that was the genesis of Hardware. Lastly, on a separate featurette, Stanley talks about his never-produced screenplay for Hardware 2. I was especially excited to hear that he had posted it online. If you are interested in seeing what was to happen after the first film, click here.

Revisiting Hardware on Blu-ray was an awesome experience and to tell you the truth, I’m a little relieved that this movie was as good as I remembered. If you are a fan of science fiction at all, this is a must watch in my opinion. Now that it has been given the release it deserves, you have no excuse.
Posted by Jay Clarke at 6:56 PM

I haven't seen Hardware probably since I was 16, and I remember it being a total headgame. I have the old VHS, but I've never actually sat and watched it. Maybe I need to retire the tape, and find the blu-ray somewhere.

Yeah, I was around that age too. You are probably thinking of the trippy hallucination sequence toward the end. The rest is pretty straightforward. Its worth revisiting for sure!

Just watching the first 15-20 minutes of this disc was amazing. The transfer is incredible.

I love Richard Stanley!
Hardware and Dust Devil are both amazing, especially in terms of atmosphere.

I hope Vacation gets finished and he has another titled "Bones of the Earth" listed on imdb. Intriguing title!