Elwood over at From The Depths Of DVD Hell shot me an email this week asking me what my Christmas Day viewing habits were and if I had any traditions. It’s a good question and you might be surprised at the answer.

I could say that I watch Black Christmas before breakfast or have the Silent Night, Deadly Night films playing in the background all day like they were Christmas carols, but that just isn’t the case. The truth is I actually make an effort NOT to watch horror films on Christmas. I’m certainly not a religious person, but Christmas is as good a time as any to just take a break from all the gore & mayhem that I absorb on a daily basis. Even further on that point, I usually don’t watch much television at all on Christmas. After the tryptophan has had its way with me, I usually curl up with whatever new book or comic I got that morning and listen to some tunes. Christmas Eve is a different story though. Again, no horror – although last year I did cheat and watch the aforementioned Black Christmas on Blu-ray – but I do have two seasonal viewing habits. First, is Frank Capra's It’s A Wonderful Life. 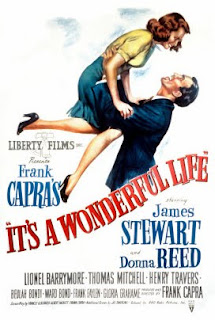 Never all the way through though. With the many hundreds of channels at our disposal now, it seems like its on a constant loop. I can jump in and out whenever I want. I think it might be, like four hours long if I ever watched it all in one sitting. The other thing is a Canadian animated short called A Cosmic Christmas. First aired on CBC in 1977, it quickly became a fixture in Canuck elementary schools everywhere, which is where I first saw it. It took me many years to find it on VHS, though nowadays it’s online for the whole world to enjoy.

Whatever your viewage on Christmas Day, have a merry one!
Posted by Jay Clarke at 10:11 AM

omg A Cosmic Christmas! I haven't seen that in over 20 years!!! Thank you so much for sharing this Jay :)

I usually watch Christmas movies that are on TV around Christmas, but also love to pull out fantasy films - Lord of the Rings, Harry Potter and even Star Wars.

You're very welcome, enjoy your holidays!!!