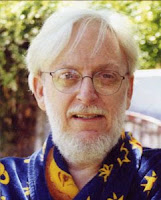 I was very sad to hear about the passing of Dan O'Bannon this morning. He was 63. O'Bannon's contribution to genre cinema was huge. Mainly known for being a screenwriter, whose credits included the original Alien, Blue Thunder and Total Recall, he also appeared in John Carpenter's first film Dark Star and worked on the Star Wars effects crew. AND he also wrote and directed a little movie called Return Of The Living Dead. You add all that up and that's a good portion of my childhood right there. To celebrate his life and career here at THS, I can think of no better way than to offer up B-17, his portion of the 1981 animated film Heavy Metal.

Yeah, it's sad news. O'Bannon was still pretty young and I'm sure had lots left to give. He was a terrific writer. Aside from Alien, Dead and Buried, Heavy Metal (as you highlight), and Blue Thunder were terrific entertainment. The Return of the Living Dead, which he wrote and directed, is one of my favourite zombie movies.