Hope you are all having a great Easter weekend. Boy, do I got a lot of stuff to talk about this week.
Comic Day In Toronto.

Wizard World held its first Comic Con here in Toronto last weekend and unbeknownst to me, there was actually some horror content within. On hand were the likes of Doug Jones, Max Brooks and Ernie Hudson, among others. Fortunately, Fangoria was on-site and reported back their findings. Click here to see what David Goodfellow found on his travels. Apparently, the attendance was a little disappointing, but I hope they come back next year, as it would be cool to have two yearly fan conventions here in The Big Smoke.
Want Blood With That?

A friend of mine forwarded me these neat Burger King ads. They are from an ad agency in Dubai for a campaign boosting Burger King's late night drive-thru service. I can see the connection. Check out the four spots below. 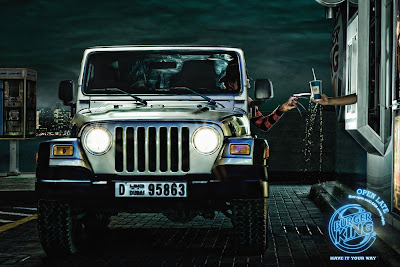 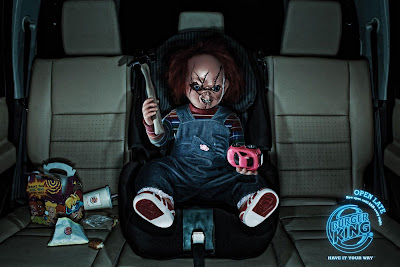 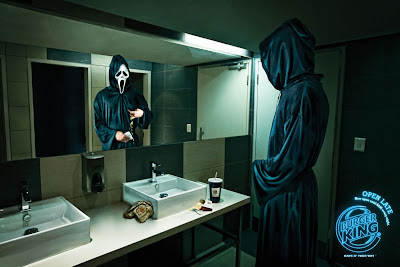 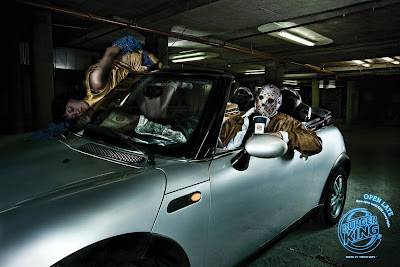 Pretty cool, although is it just me, or is the Jason one a bit 'date-rapey'? And I'm kind of surprised they didn't use Leatherface. He is the carnivore, after all.
Those Darn Undead Kids!

I can't let the anniversary of the resurrection go without talking about zombies, can I? Fortunately, The Inevitable Zombie Apocalypse posted a great list of zombie children, featuring the pint-sized reanimated denizens of movies such as Pet Sematary, Zombieland and both incarnations of Dawn Of The Dead. Click here to check it out.
Trailers, Trailers, Trailers!

Boy, a SHITLOAD of trailers hit the web this week. First, a full trailer appeared for the infamous The Human Centipede. You know what, up until now I thought this movie was Japanese. Anyone whose seen the cinema those crazy fucks spew out can understand why I just assumed it was birthed from their warped sensibilities. No, this vomit-inducing tale is from the Netherlands. And I always thought they were such a innocuous bunch. Here it is below.

This trailer is for the upcoming documentary American Grindhouse. If this is half as fun as 2008's Ozploitation doc Not Quite Hollywood, it'll still be worth catching. Besides, I could watch John Landis talk for hours.

The last two are movies that I've been waiting FOREVER for. Bio-Slime is one that I first mentioned when this blog was still caked in its own after-birth. Release it already!

The second has no excuse for its prolonged witholdin'. Vincenzo Natali is one of Canada's darlings and the fact his new film Splice premiered in Spain and not here makes no sense to me. Anyway, here is the first trailer below.

This is a short that I saw several months ago, but I've been waiting until Easter rolled around to post it. Behold, Drew Daywalt's The Easter Bunny Is Eating My Candy.

LOVE IT! Also, you might want to check in on his latest project. He was just started posting his Vlogs from his stay at the haunted Queen Mary Hotel. Click here for the first episode, posted a few days ago.