How is everyone this fine morning? Let's see what the messenger has for us today. 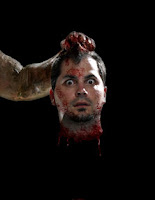 All this week, Twitch has been posting interviews with directors, as part of their New American Horror series. They asked five directors, ten questions and the results were quite interesting. For instance,

Twitch: What is the first moment you remember thinking that making movies was something you wanted to do?

Adam Green (Frozen, Hatchet): Walking out of E.T. for the second time. I was eight years old. I just couldn't get over how a film could affect me that much. I mean, I was shaken to the core and just devastated at the end of that movie - and I still am every time I see it. (I think I'm on my thirteenth theatrical viewing of that film at this point.) Even at age eight, I was old enough to understand that what I was looking at was not real and I could see through the effects. I even remember saying to myself through my hysterics when E.T. says goodbye to Elliot; "It's just a rubber doll. It doesn't even look real." Yet, to this day if I even hear a measure of that soundtrack or if someone even says "I'll be right here" - my eyes swell up. From that point on I was captivated with story telling and the art of emotional manipulation through celluloid. Going to see movies was no longer just about having fun or escaping on a hot summer day. It was like going to church.

Ti West (House Of The Devil, The Roost): I don't remember when I decided it was something I wanted to do - it was sometime in high school - but the first movie that made me think I could actually do it was BAD TASTE.

Adam Wingard (Pop Skull): When HONEY I SHRUNK THE KIDS came out I have a very clear memory of asking my mother what the difference between a director and a producer was. She wasn't really sure. It wasn't until around seventh grade or so that my folks got one of those old VHS camcorders. Then things really got heated as my brothers and I started making weird little home invasion themed short films. I think initially I wanted to do more sci fi or action oriented stuff. It wasn't until I started watching a lot of strange Japanese cinema that I realized I didn't need a budget to make something really interesting.

Paul Solet (Grace): I commandeered the family video camera as soon as we got one and was always running around torturing friends on tape, and making TERMINATOR rip-offs with my cousins and brother, but it really wasn't until I ended up with Eli Roth and his brothers as my camp counselors when I was about 11 that I really started to understand that this was something you could actually do as a career. Even at 17 or whatever, Eli knew absolutely what he wanted to do, and was taking steps to do it, so I followed his example and really just went for it.

Jim Mickle (Mulberry Street): It sounds predictable, but I remember the exact shot in ARMY OF DARKNESS where all of my unfocused interest in the film world kind of clicked into place and I knew exactly what I wanted to be doing. I was about thirteen and obsessed with make-up FX and animatronics and was always trying to build monsters with bike brake cables and cheap latex. The idea of making movies was just an excuse to try out FX gags. But about 10 minutes into ARMY OF DARKNESS, there's a wide shot of them pulling up to the castle and I remember being completely caught up by the filmmaking up to that point. I was aware for the first time of the language of storytelling and how whoever was making the movie was having fun with camera moves, compositions, costumes, music, etc. There were all these other elements to filmmaking that I started paying attention to.

I had just watched TICKS and LEPRECHAUN that day too, so I was ready for something new even at that age.

For the full interviews, click on the corresponding director. It is some great stuff and really gives you a window into the headspace of the young up-and-comers right now.

It looks like Mick Garris' new interview project with the pillars of the horror community is now up and running on Fearnet. So far, Garris has had Rick Baker, Wes Craven and Robert Englund at his table.

I couldn't get all the videos to work for me, but here is the link if you want to give it a try. 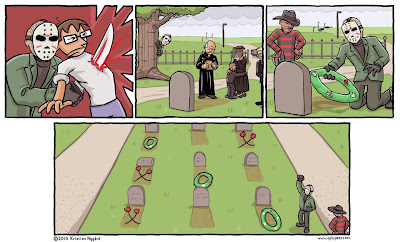 Now, I'm going to be away all week (Vegas baby!), but I have a whole bunch of posts ready while I'm gone, so check back often to see what I have in store. See you in about ten days.
Posted by Jay Clarke at 10:45 AM