Twenty years ago today, Twin Peaks premiered on ABC. During its run, the mystery of ‘Who Killed Laura Palmer?’ captivated millions. By the time the first season finale rolled around, which ended on a cliffhanger involving the show’s protagonist Special Agent Dale Cooper (brilliantly played by Kyle McLachlan) being shot in his hotel room by an unknown assailant, Twin Peaks had become a bona fide phenomenon.

Twin Peaks burned brightly for a time before unfortunately petering out once the mystery was wrapped up during its sophomore season. Show creator David Lynch has since said he regretted revealing the killer – he and co-producer Mark Frost were leaned on by ABC for a resolution – as his core interest had always lied with exploring the world he had created and the eccentric denizens that lived within it. They went out in style though, delivering one of the most chilling series finales to ever rock the small screen. One wonders how different this show would have turned out and how long it would have survived if he and Frost hadn’t buckled to network pressure to reveal Laura Palmer’s killer. Things are certainly different now. Imagine these network execs dealing with a show like Lost.

Damon Lindelof: You wanted to see me?
Suit: Yeaaaaah, so we’re gonna need to know what the fuck is going on here.

Now, it seems like you can do pretty much whatever you want as long as the ratings are on your side. Would Twin Peaks have lasted six seasons if they’d waited that long to tell us who Killer BOB really was?

I sadly came late to this party. I wasn’t a big television watcher back then, so I only heard about the show once it became popular. I just remember how much everyone was buzzing about the second season premiere, so when it rolled around, I tuned in. And was promptly confused… 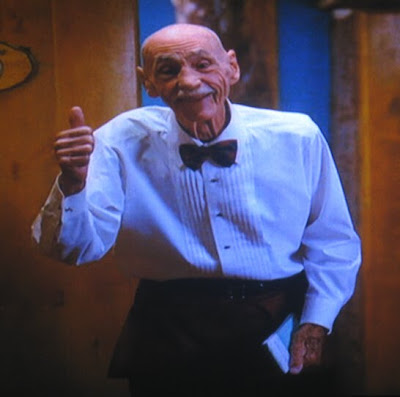 Now, that’s not to say I wasn’t fascinated, I just didn’t understand it. I was not the huge Lynch fan that I am now – the only Lynch I would have seen up to that point would’ve been Dune – so the show might as well have been in another language. Twin Peaks was Lynch’s attempt to elaborate on the themes he had begun to explore in Blue Velvet. Where things that are pretty on the outside, are actually rotting from within. One needs to look no further than the opening scene of that film to see what he thinks of The American Dream.

As for my attempt to view the premiere, I gave up at the first commercial break. I did however, watch Fire Walk With Me when it arrived at my video store because I still had the desire to visit that world, even if the way it was being told was so incredibly foreign to me. My appetite for more Lynch had now also been whetted by subsequent viewings of Velvet and Wild At Heart. Since I knew it was a prequel and had heard who Laura’s killer was, I figured what the hell, right?

I adored Fire Walk With Me. I was completely entranced by it. Sheryl Lee’s performance as Laura Palmer was extraordinary. Despite being an inherently unlikable character, her brutal demise disturbed me deeply. It still does, as her story was such a sad and tragic one. I soaked up the dark imagery and symbolism like a sponge, even though its deeper meanings were largely unknown to me. The bit with David Bowie was just so freaky, though I would not know the gravity and importance of that scene for a few years yet. I was just beginning to grasp Lynch’s growing penchant for bending the laws of reality and narrative. And then there was the music. Fire Walk With Me still remains my all-time favourite soundtrack. If I had a dollar for every time I’ve listened to it, well… I’d have a lot of money.

Ultimately, Fire Walk With Me left me with a greater need to see the show. That was easier said than done. Due to screwy distribution rights, there were only seven episodes available on VHS and the pilot existed only as a separate movie, which featured a tacked-on ending for the European release. I gobbled all these up, but was still left hanging and right back where I started a few years before, with Agent Cooper lying in a pool of blood on his hotel room floor. It wasn’t until 1995 that I finally got to watch the show in its entirety. As part of its ‘TV Too Good For TV’ programme, Bravo! started running the show in its entirety on weekdays. 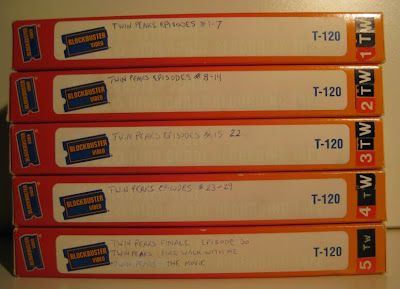 Boy, did those tapes get a lot of mileage.

For a good while, Twin Peaks consumed me. I recall pouring over pages and pages of forums posts on usenet newsgroups that were theorizing over every little detail. I also remember spending an entire evening with a friend coming up with a definitive explanation for all that took place and how it related to Fire Walk With Me. Boy, that was a brain drain, let me tell you. It was certainly good practice for when Mulholland Dr. came along though.

Perhaps the most rapturous moment for me was rewatching Fire Walk With Me after seeing the series. It was like watching a different film. The scene where Annie appears to Laura in her bedroom now BLEW MY FUCKING MIND. I’ve often wondered if that wasn’t the purpose of Fire Walk With Me all along. Was it Lynch’s way of giving us hope that Cooper’s actions in the series’ final moments hadn’t damned him forever?

Finally in 2007, Paramount finally got their shit together and released the Definitive Gold Box Edition of the entire series. 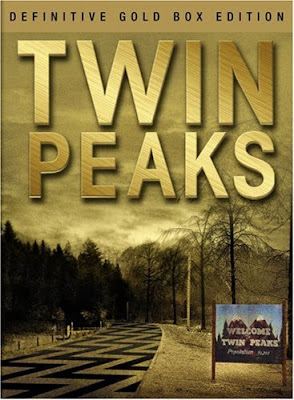 I rewatched it with a buddy who’d always wanted to see it and we knocked it off an episode or two at a time. God, what a blast. There’s still that seven or eight episode stretch in the twenties that’s a bit dodgy, but damn if that show wasn’t something special.

Even though it died due to low ratings brought on by a number of things, there is no denying it had a huge effect on television and blazed a trail for shows containing darker content like The X-Files and Millenium, as well as serialized mysteries like the criminally underseen Nowhere Man.

Twenty years later, people still remember Twin Peaks fondly, as one of the highlights of primetime television.
Posted by Jay Clarke at 10:05 AM

Great post - lots of love going out to Twin Peaks in the blogosphere today! (I posted my own ode to TP on my blog as well;)
They just don't make television like that anymore...

Watching those clips brings back a lot of memories... I need to book another viewing one of these years.

Excellent look back at the show and FWWM! I have fond memories of watching TWIN PEAKS when it first ran on TV and taping 'em all on my parents Betamax! Man, did I wear out those tapes. I also got to see FWWM on the big screen opening weekend and remember the soundtrack was cranked waaay up - the only way to see it. It's a shame that Lynch and co. will probably never return to the show again but at least he left us with quite a bit of stuff to watch over and over again.