...Said The Spider To The Fly.

Spider Baby is a movie I've always been curious about, so thanks be to Final Girl for giving me the kick in the ass to finally check it out for this month's Film Club. We had Spider Baby at my store and it is one of the few coverboxes that still manages to elude me. It was just a close up of Sig Haig's face screaming into the camera. Not really a selling point, so maybe that's why I never checked it out. Now, if it had been a picture of cutie Virginia (Jill Banner) brandishing her two kitchen knives, that would have been a different story. 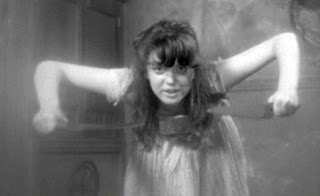 The movie begins with Peter, played by Quinn Redeker – can we all just take a moment to ponder how bad ass a name that is... okay, moving on – telling us 'the maddest story ever told' and his experience meeting his distant kin, The Merryes.

So, I liked this movie quite a bit. Being a Jack Hill novice, I didn't really know what to expect, but this is a pretty good yarn. There's some great shots that really work with the black and white. Every time I knock off one of these notable titles from the sixties, it always seems to come back to great composition, as Carnival Of Souls was the same way. 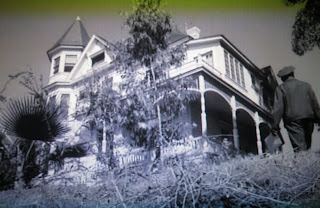 I wonder if Psycho was an influence. And conversely, I wonder if Tobe Hooper had this in mind, when he made The Texas Chainsaw Massacre six years later. I know that Texas was loosely based on the lore of Ed Gein, but there are several similarities between that film and Spider Baby. A remote house, inhabited by strange characters, some of them cannibals, visited by unsuspecting travellers, and then so follows an awkward dinner scene.

I'm not used to seeing horror films that are this dialogue-heavy, but I think it worked beautifully. Lon Chaney Jr. is great as Bruno, the one responsible for looking after the three inbred Merrye children. I am so used to seeing Sig Haig just spewing out curse words, that it was a rare treat to see him stretch his legs as an actor in a role where he doesn't speak. And then there's Jill Banner as Virginia. What a looker she was! I wouldn't mind getting caught in her web waka waka.

Spider Baby doesn't really offer any surprises, but I liked telling of it all the same. Even though it's running time is only eighty minutes, it does feel a bit padded at times. There is a chunk of what felt like fifteen minutes spent following a lawyer as he skulked around the house at night, so that kind of halts the film's progress for a bit. And I'm not quite sure what all the mugging to the camera at the end was about either. 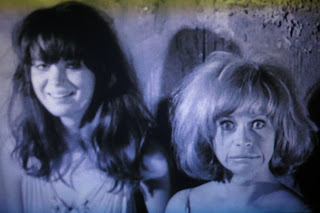 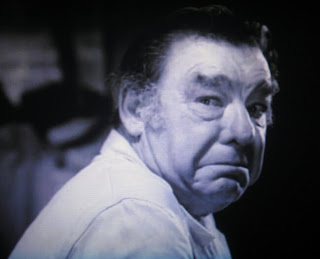 Nevertheless, I had a lot of fun with Spider Baby. This is meaty subject matter that I'm actually surprised no one has remade yet. Oh wait.
Posted by Jay Clarke at 7:10 AM

You can get the complete director's cut of Spider Baby in a new transfer from MIP/Dark Sky, available on Amazon with the kind of cover image that would appeal to you. Check it out. The version you have is an inferior pirated version. See: http://www.amazon.com/Spider-Baby-Directors-Jill-Banner/dp/B000RPCJ9I/ref=sr_1_1?ie=UTF8&s=dvd&qid=1271090805&sr=8-1

Actually, it would be simpler to purchase the DVD from: http://spiderbabyonline.com/
where you can get it autographed, if you like.

That's looks like a pretty good package, thanks for the heads up!

GAAAH NOT A REMAKE.

I loved this movie. Agreed that it was fun to see Sid Haig do some acting! I hope the remake doesn't cast him as Bruno...

I love this movie too...Fell head over heels for it on my first viewing. Not only is it fun and trashy, but the acting is solid and the look of the film is terrific - great photography with shadows falling in all the right places. And Jill Banner is something else...That one scene where she crawls into Peter's lap is, uh, well, kinda disturbing actually - she's a beautiful seductive woman, but with the mental age of a school girl.

It's really a ton of fun. I babbled about it awhile ago and posted some screencaps too, but I like your review much better.

Yet another remake. Horrid.
I'm going to pick up the signed DVD if I can. What a thing to own!
The movie was so much fun. Really a fine little film with some awesome madness.