Wow. First I saw Bruce, Arnie & Sly together in the new Expendables trailer, and now this news from Twitch. 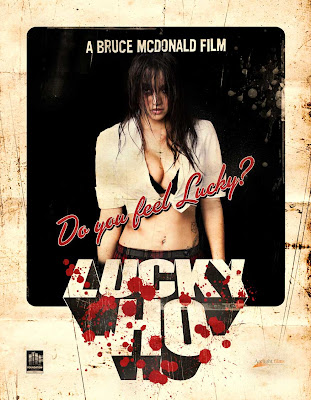 Tough, sexy, smart. A young Kung Fu prodigy. Meet LUCKY HO, the eighteen year-old schoolgirl who will break your heart with a smile and break your neck with a flick of her wrist.When her mother passes away suddenly, Lucky is left alone to fend for her younger sister, TRACEY, in a world of male predators and female competitors. As a defender of the underdog set, Lucky tries to stay cool, but her explosive temper keeps the stakes hot and attracts plenty of trouble. Lucky watches her dreams of getting into Harvard go up in smoke as she is expelled, and the day only gets worse when she comes home to find a drunken Tracey in the hands of their disgusting stepfather and his friends. The tension escalates into the night as threats and anger turn ugly and result in Lucky being unfairly charged for murder.Life on death row is no day at the prom. Lucky finds herself being thrown into a bizarre underworld filled with transvestites, bull dykes and a corrupt warden with a "passion" for his female prisoners - especially newcomer Lucky. The evil warden proffers an after hours fight club where the female inmates are pitted against each other in a gruesome battle to the death. Lucky will have to fight like never before because among these crazy inhabitants, fighting is more than survival, it's pure entertainment. As Lucky trains to combat some of the meanest inmates in prison history, only one thing keeps her going: escaping and saving Tracey from their corrupt step father. Lucky's steel will and exceptional skill will help her to overcome the dark forces that conspire against her in a world that doesn't seem to want to give her a chance.Heads will roll. High kicks will fly. Cross-dressing fashionistas will serenade bloody victories and shower brawls. From knee socks and numchucks to shakedowns and chop-ups, every fight brings Lucky one step closer to freedom...

Sometimes life is just TOO GOOD.
Posted by Jay Clarke at 9:25 AM

I don't know about this one. I'm getting really sick of homages to exploitation. I have yet to see one that doesn't come off as just a shallow and heartless fanboy cash grab.