Good morning all. Here's some tasty tidbits to warm you against those November chills.
A Beautiful Mind.
Recently, the trailer for the documentary on B-movie pioneer Roger Corman entitled Corman's World: Exploits of a Hollywood Rebel appeared online. His influence on Hollywood, just in the careers he helped launch, is unmatched and the best thing is, a lot of them speak in this documentary. The doc is filled with Hollywood royalty, ranging from directors like Martin Scorsese and Ron Howard to actors Bob DeNiro and Jack Nicholson. Here is the trailer below.

This year's American Film Market was held last week and perhaps the most bizarre news that came out of it was about a Maniac remake. Twitch reports that Alex Aja is producing a remake starring Elijah Wood as the title character. I don't have a knee-jerk reaction against a remake of this movie, I just don't understand the impetus behind one. Maniac is a film of its time, and beyond the gore and gritty performance of the late Joe Spinnell, there's nothing really unique about it. The Elijah Wood news is odd as well, since I heard that this new version is apparently supposed to be all in POV. Click here for the original announcement.
Viva Berlin!
Germany has been coming on strong recently with zombie projects. Last year, they gave us the excellent movie Rammbock, and now the trailer for a new endeavor has hit the Web. Check out the German trailer for Viva Berlin!

The most astonishing thing about this project is that it is A WEB SERIES. I mean, look at the quality of that above clip. The head explosions alone make it seem like a top notch production. I can't wait for this!
The Thing That Could Have Been.
After my Thing prequel review, AllHallowSteve was kind enough to post a link in my comments section about an interview with the original effects guy on the project. Apparently, some practical effects were shot, but replaced later. Well, Bloody-Disgusting recently posted some of the designs for what some of those creatures may have looked like. Let us lament on it together, shall we? 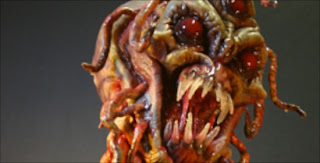 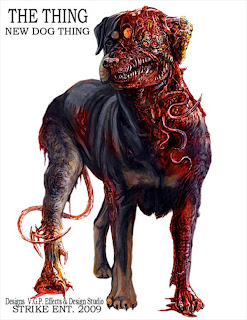 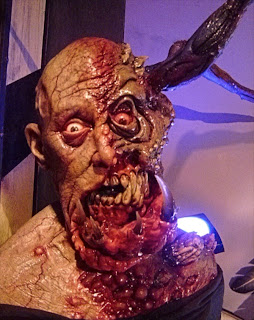 Okay, that's it for now. Have a great Sunday, folks.
Posted by Jay Clarke at 9:40 AM

Did you review the penultimate zombie move The Dead yet, or am I missing it?

No, not yet. I was holding out for a Toronto screening, and lo and behold, a Jan 19th one was just announced! Stay tuned!!

I saw it when I was in Austin over a month ago. Went to see The Thing remake too, same multiplex. It was mostly lations there, but they didn't knife me. I assumed The Dead was out in wide distribution at that point.

For the positives, the Dead definitely looks good, has effective gore, and has an interesting take on the zombie scenario. I don't recall the genre taking a tangent into how it would play out in an African nation.

Where it fails is making the lead sympathic. Kind of like the Walking Dead, you left thinking that the military guy protagonist is just making way too many stupid mistakes, and it kind of takes you out of the moment. Too much of the plot is driven by boneheaded moves.

Example, he spends a night sleeping in a tree, but drops his rifle when the zombies try and get him. What does that accomplish? Nothing in terms of what happens in the story, it's just exaggerated suspense.