I was sad to hear about the passing of director Ken Russell this morning. He was 84. Russell was a unique talent that gave us such memorable films as Altered States, The Devils & Gothic. I was fortunate enough to see him in person at last year's Festival of Fear, where he presented a Lifetime Achievement Award to iconic Canadian filmmaker David Cronenberg. 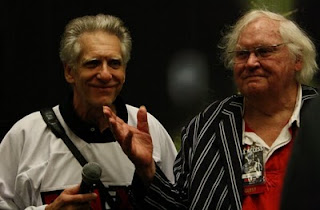 Shortly after that, he spoke at a special screening of The Devils, which I later featured as my 666th post. I'll always remember him shouting at the photographer chick to "get out of it!" when she leaned in too far to get a shot. Good on ya, Mr. Russell.
Here below is a cool piece from the BBC honouring his life and work.
Posted by Jay Clarke at 7:06 PM

He wasn't everyone's cup of tea but he leaves a body of work like no other. One of British cinema's greatest filmmakers.