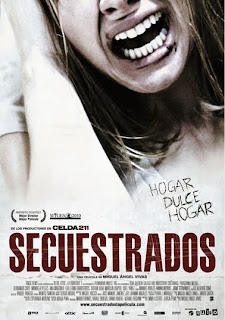 A upper class family are terrorized in their home by three masked assailants.
As I said, I saw this over a month ago and it is still rattling around in my brain. So, what made this stand out from the countless other home invasion flicks that are flooding the market of late? Well, there are a few things.
The first thing is its simplicity, and the second is its inherent realism. It felt entirely plausible to me and I’m actually kind of surprised that there wasn’t a “based on actual events” title card thrown up at some point. In contrast to the spartan storyline though, the technical aspects of this film are no less than spectacular. I was aware of the one-take sequences and use of split screen, but it was so naturalistic that I didn’t realize just how pervasive they were until later. This entire film is a series of intensely orchestrated continuous shots that marvellously succeed at pulling you in. I think that director Miguel Ángel Vivas is every bit as skilled as Michael Haneke in this regard. Secuestrados also featured one of the best instances of CG-enhanced gore I've seen, with a head-bashing scene that ranks right up there with the fire-extinguisher bit from Irreversible. 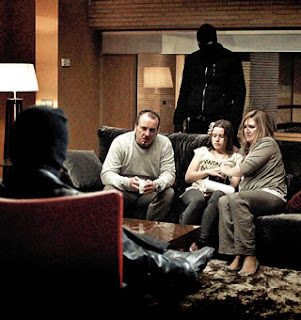 The performances are all solid, as well. Manuela Vellés gives a chilling performance as the daughter Isabel, as she truly looked like she was losing her shit – and rightly so. Fernando Cayo – it took me a while to recognize him from The Orphanage – is also memorable as the helpless patriarch.
I had to chuckle while writing the synopsis above, as that byline is almost identical to Adam Wingard’s You’re Next, but in tone they could not be more different. Secuestrados is dark, morose and made with such an adept hand that your mind will not soon forget it.
Posted by Jay Clarke at 7:59 AM