The Odd One Out.

This weekend I finally got a chance to check out Paranormal Activity 3. Being a pretty big supporter of the first two, I was curious to see if the filmmakers caught lightning in a bottle a third time. 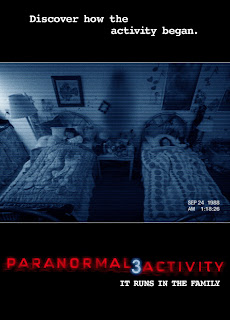 The third film, set in 1988, explores Katie & Kristi’s first encounter with the spectral force that terrorized them in the first two films.
Yeaaaah so… I wasn’t into this one so much. I think Paranormal Activity 3 may be a case of going back to the well too many times. I mean, there are still some nicely constructed scares, most notably the ones involving a camera mounted to an oscillating fan, but this concept as a whole just isn’t as fresh as it once was.
There is something about Paranormal Activity 3 that seems not as well put together as the previous two installments, as well. The reason Paranormal Activity 2 worked so well was that the writers somehow managed to flawlessly link it up to the first film. After re-watching the first two on Netflix shortly after, the same cannot be said for this latest installment. There were several plot points in this movie that didn’t gel and the ending was fairly problematic. I can forgive that the last scene was very similar to one in a ‘found footage’ flick I saw last year, but not that it messes with the series' lore that up until now had been pretty airtight. It would have made so much more sense to finish on the house fire referenced in the first two movies than what we actually got. 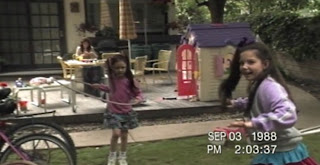 The justification for the father to film the last act was also pretty thin. Obviously, when dealing with this format there is a certain level of suspension that must be allotted, but I couldn’t come up with any rational reason why he would still be carrying the camera around after they switched locations.
Aside from all that though, I suppose that my disappointment with Paranormal Activity 3 was largely due to expectation. I went into the second movie with low expectations and was pleasantly surprised, whereas here I was hoping it would sustain the high; and it didn’t.
Posted by Jay Clarke at 10:04 AM

Thanks for this review. I had a hunch the 3rd might be the start of it's decline. You just saved me the time of watching this myself!