When I was nine, I happened to see a little movie called Microwave Massacre. And because of this coverbox-- 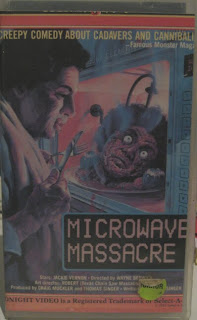 --I've always kept my eye out for it since. Fast forward twenty-seven years later to when I managed to find a battered copy of it within the depths of Ebay. Thus VHS Nite Part IV was conceived.
The turnout on Saturday was bigger than I expected, so I perhaps oversold it a bit in my event invite. However, if there was ever a bad movie to watch with a group of people, this was probably it. And as has become custom on these joint Horror Section/DirtyRobot events, the latter fashioned a culinary delight for all of us to enjoy. And magically, it was if he knew that two-meat lasagna was perfectly appropriate for the occasion! 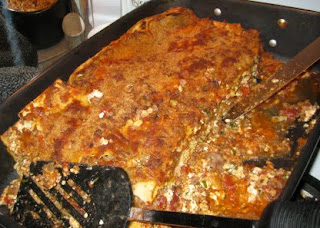 It was half eaten before I could even snap a pic!
But onto the movie. It makes sense to me now why I remembered all the sex bits of the movie and not the gory bits. It was because there really isn't much gore and my pre-adolescent brain was just glad to see boobies. 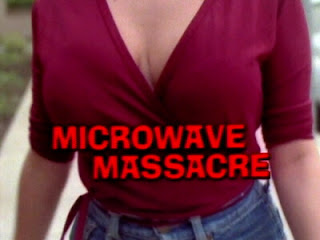 In fact, I'd say Microwave Massacre has more in common with eighties sex comedies like Porky's and Night Patrol, than it does the horror slashers of the day. The fast and furious one-liners here make the infamous ones delivered by Joe Piscopo in Dead Heat look like high comedy, but there were a few that had us laughing. 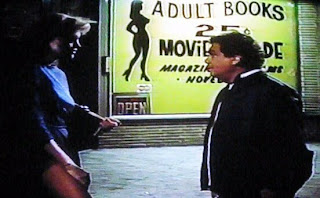 "You look so much better in the dark." "What do you want me to do? French? Greek? Japanese?" 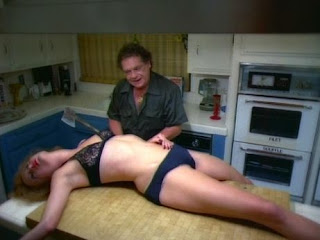 "I'm so hungry I could eat a whore!"
Even on my first viewing, I was able to clue into the double entendres in the movie, but I also had a base reference of countless Three's Company reruns under my belt by that point.


No matter how bad the movie got, I think that most in attendance were having a good time. Though I think all were horrified that I told them beforehand that star Jackie Vernon was the voice of the cartoon Frosty the Snowman. 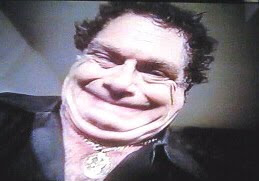 Happy Birthday!!!
Yeah, let that sink in. I have to say that I found a lot of the badness endearing though. I loved that this massive microwave (seriously, did they ever make them that huge?) was bigger than the box it came in. 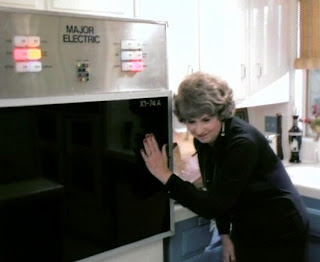 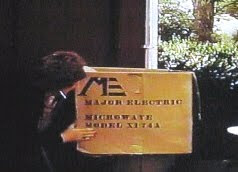 A lot of the scenes were obviously "we've got to get this in one take" situations and the result was borderline at best. Hey, what do you do when "let's do it again" isn't an option? I guess you just move on. Like say when someone has a strong impulse to work in a Chinese food joke, but doesn't feel it is important to, you know, actually cast an Asian in the role. 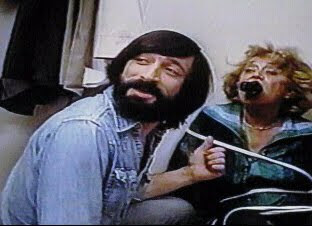 Reubens doing his best Adrien Brody impression.
So, yet another successful movie night. Nine-year-old me would be proud!
Posted by Jay Clarke at 10:04 AM