With Shout Factory's recent Blu-ray release of 1976's The Town That Dreaded Sundown, it seemed like as good a time as any to fill in this little gap in my repertoire. 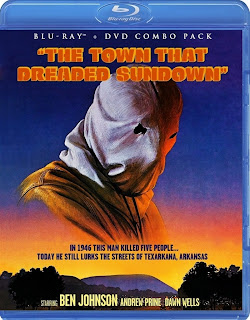 In 1946, a hooded assailant terrorized the community of Texarkana, Arkansas, killing five people. He was never caught.

I guess I should begin by saying that I previously did not know this film was based on actual events. I find it strange that this “Phantom Killer” is not more widely known, considering he not only evaded capture, but his crimes predate even Ed Gein's, who is widely considered to be the first “modern” serial killer. Even more disconcerting is that The Phantom's modus operandi shared similarities to both The Zodiac Killer and Son of Sam, which makes me wonder if there isn't some sort of secret serial killer handbook out there somewhere.

The reason I emphasize the true crime aspect is I feel it caused the filmmakers some confusion about what kind of film they wanted to make. The Town That Dreaded Sundown is a weird hybrid of a crime film and straight-up documentary. A scene would open with a narrator announcing the date and names of the victims,  but then play out with standard storytelling methods. It was a little bewildering, but no more than the uneven tone. I wonder if the inclusion of the keystone cops comic relief was director Charles B. Pierce's attempt to emulate Wes Craven's Last House On The Left, released a few years earlier. Unfortunately, it was even more out of place here, as The Town That Dreaded Sundown reaches Dukes of Hazzard levels of goofiness.

That said, there were moments where the film seemed ahead of its time, as the actual murder set pieces were very well executed. I was especially surprised by how much the style - and I wager a lot of the credit needs to go to cinematographer James W. Roberson for this - resembled that of the American slasher genre, considering it had yet to be invented – or at least popularized. I can only imagine how alarming it must have been to see Dawn Wells (Mary Ann from TV's Gilligan's Island) get shot in the face (twice!) back in '76. Though the shock factor may be dulled now, that whole sequence still plays as well as it ever did.

The other thing I feel I have to mention is the batshit crazy “trombone scene”. While I was watching it unfold, I was thinking “this actually happened? It must have because no one could ever make this shit up.”


Well, it didn't happen. And they made it up. So, were they trying to be funny? If so, I must have been sick the day they covered that kind of black comedy in school. For me, it is just one more odd decision made by the filmmakers. However, it is one of the few things the film is remembered for, so hey, I guess he's a genius.


All in all, The Town That Dreaded Sundown has its moments, but I'd say its uneven tone and structure is probably what kept it from becoming as iconic as some of its American contemporaries like The Texas Chainsaw Massacre and the aforementioned Last House On The Left.
Posted by Jay Clarke at 10:00 AM