Hollywood's first zombie blockbuster World War Z has finally shambled – or more appropriately, sprinted – onto screens, so I made a beeline for the nearest Cineplex last Friday eve. 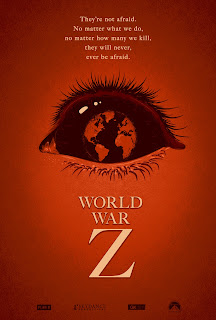 When a global zombie outbreak hits, former UN worker Gerry Lane (Brad Pitt) is sent out to find the source, and possibly a cure. But, is it already too late?

Last week, I happened to see a wonderfully apt review byline which read, “World War Z succeeds despite itself”. That's it exactly. Even with all of its negatives, this movie was still quite entertaining. But, I'll get to that. First, the head scratchers...

I'm afraid I can't let go of the fact that nothing was carried over from the source material. I understand that the decision was made early on to drop the anthology format of the Max Brooks' tome, but surely they could've incorporated something. I'm sorry, but the five-minute onscreen showdown in Jerusalem does not equate to the book's epic Battle of Yonkers. 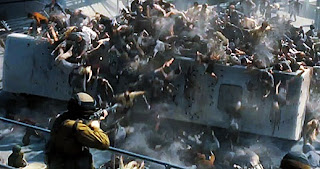 I still maintain that Marc Forster is Hollywood's worst action director. As in 2008's Quantum of Solace, he's still all about that close-up, shaky-cam action style that I can't stand. Ever since the Greengrass' Bourne films, we've been plagued by this type of filmmaking. I get that you are going for an “it's like you're there!” vibe, but really all you're doing is making us fill in the blanks. It's lazy and, more importantly, annoying. Imagine if The Matrix had been shot like that???

When the camera does occasionally pull back from the fray, we are greeted by a throbbing mass of CG. It's decent – clearly there's a lot of processing power behind all those rendered undead – but it's still not, you know, real. What was more frustrating was that the practical zombie stuff was actually very well done. Why couldn't there be more of that? I also feel that the “wow” moments were dulled due to, as per usual, seeing ninety-five percent of them in the trailers. 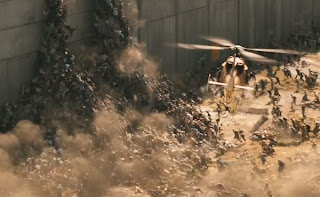 Lastly, this is likely one of the weaker 3D transfers I've seen to date. Save for a few gimmicky moments where zombies fly at the screen, it is completely unnecessary. It really only serves to muddy things up, and considering that more than a few of the action set pieces take place in the dark, that's not a good thing.

And yet, World War Z is still a functional zombie action movie. Pitt, like so few A-listers can, carries this movie on his shoulders and powers through all the dumb action logic throughout. And it does attempt to tell a global story – even if all we get of South Korea is a rainy tarmac – which is certainly far more than they could've done. I'm sure in some filmmakers' hands, World War Z would've never left Jersey.


At the end of the day, if you liked what you saw in the trailer, you'll have a good time because that's what you're getting. No more, no less. I kept my expectations low, which is why World War Z didn't disappoint me. I just can't help but wish there had been more meat on this bone.
Posted by Jay Clarke at 10:00 AM