It took over three years, but my crew and I finally returned to Las Vegas last week. So, what's a guy like me to do with a free evening in Sin City? No, not that. I checked out Eli Roth's Goretorium, of course! 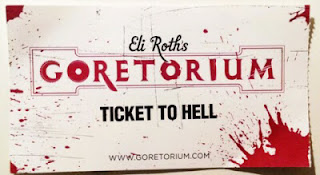 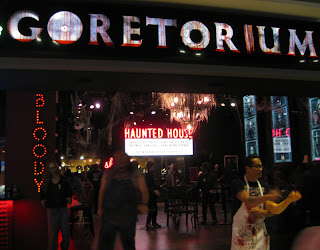 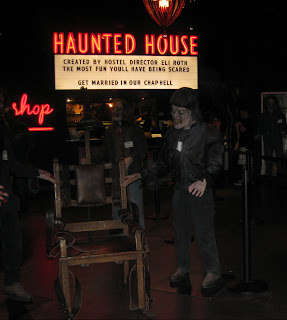 I had a great time. It was a little more tourist-y than I was expecting, with it being lodged inside a shopping mall, but once inside the actual attraction, it was all good. I appreciated that instead of just randomly walking through a maze of thrown together blood and guts, there was an actual storyline to the proceedings. The history of the Delmont hotel was laid out for us by our tour guide. That is, before he was decapitated, of course. A ride in a creaky service elevator then led us to several well-conceived abominations throughout the fifteen minutes it took for my group to walk through. The production values were probably the best I've seen, and there were several choice gags. I had to laugh when the crazy butcher got in my face and asked me if I was a vegan.


So, the question you probably want to ask is, is it scary? Well, not really. But I'm not the one to ask. Perhaps the two screaming chicks in front of me would have a better answer for you. I thought the end of the attraction, which spits you out into the Baby Dolls Lounge, was a nice little capper. Naturally, I had made my way up to the front throughout the gauntlet and stepped up to be the first to venture through the exit.The Lounge was a cool little setup with a gorgeous view of the strip. The stunning bartender was certainly a plus, as well. She didn't spare the bottle and made us the kind of drinks that really creep up on you.

I think my only disappointment was the absence of some stuff I was hoping for. When Roth was in Toronto for a screening of Cannibal Ferox last year, he laid out all the stuff he wanted to do for his “all-year-round haunted house”. These included things like live zombie feedings and the ability to watch people going through the maze and fuck with them with buttons of noise and such. Unfortunately, neither of these things were there when I went. However, there was a nice touch in the washrooms though. Stepping up to the urinal, I was taunted by a disembodied female voice asking if “it was cold outside”.

The Goretorium, despite its kitschy exterior is definitely worth checking out. I expect things probably ratchet up a few notches closer to Halloween. Maybe I'll have to return during Vegas 3.0!
Posted by Jay Clarke at 10:00 AM