Hello all. Here's your weekly dose of genre news.


I came across this awesome print on Print Club London this week. 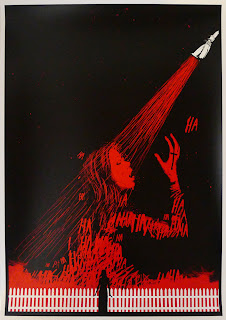 Created by UK artist Peter Strain, it is part of a series commissioned by Film 4 and Somerset House in conjunction with a bunch of summer screenings. You can check out the rest here.


A few teasers appeared online this week to promote the upcoming third season of American Horror Story. Simply titled Coven, it appears to be centered around witchcraft, but judging from the first two stanzas, we can expect many other things that go bump to appear during its run.

Regrettably, I have to end today's proceedings on a sad note. Actress Karen Black passed away last Thursday at a hospital in California. She was 74. In 2010, Black was diagnosed with ampullary cancer and had since had many operations to remove it. Her and her husband Stephen Eckelberry had even raised a significant amount of money to undergo an experimental procedure in Europe, but her health preventing her from travelling. Eckelberry remained by her side until the very end.


Black's career spanned six decades and included film and television. Her career took off after appearing in such classic films as Easy Rider, Five Easy Pieces & Nashville. She also became a horror icon by starring in such films as Burnt Offerings, Killer Fish, Trilogy of Terror, House of 1000 Corpses and more recently the wonderful horror comedy Some Guy Who Kills People.


Black leaves behind a legacy of almost two-hundred credits and an energy that will be sorely missed.
Posted by Jay Clarke at 10:30 AM