The guest of honour at the Festival Of Fear this year was filmmaker Joe Dante. The director of such seminal genre pictures as Gremlins, The Howling and most recently The Hole, was in town for the entire weekend greeting fans and talking about his career. I've always felt that Dante is one of the best in the biz at creating kid-friendly genre pictures. As Gremlins served as a gateway drug to horror, so to did The Explorers into science fiction. I also feel The Hole, which has criminally denied a decent release here, was one of the best attempts at recapturing eighties-style filmmaking. I'm not talking about aesthetic, which is the more popular thing to do these days, I'm talking about actual storytelling. The Hole was a marvel, and proof positive that Dante is still as talented a filmmaker as he always was.

On the Thursday, Rue Morgue screened the 1989 Tom Hanks vehicle The 'Burbs at the Lightbox. It had been a long time since I'd seen it and it held up beautifully. Dante was on hand for a Q&A, which Kurt Halfyard graciously decided to post on RowThree. Here it is below.

A few days later, he did another Q&A at the Fan Expo. Here are some highlights.


Dante on working with Roger Corman;

“If it wasn't for Roger Corman, I wouldn't be sitting here. Roger realized that the cheaper you could make a movie, the more money you could make from them. There was still a big drive-in market and then turned into the VHS market later. So, we were making pictures for a third of what it would cost anybody else, and they were the same subject matter (as our competitors). They were, you know, sex, drugs, rock n' roll, motorcycles, monsters, whatever would play on the drive-in circuit. I was one of the few people that worked for him that had seen all his old movies, so I had an advantage that a lot of other people didn't have. And also I liked these kind of movies. A number of the people who worked for Roger really thought they were slumming. They thought 'okay, I'll make one of these women in prison pictures, and then I'll make my magnum opus about the blind jazz man from New Orleans who wants to find his long lost brother' or whatever. Those pictures never got made because the movies they made for Roger were not very good because they didn't care about them. They just thought it was a means to an end. Whereas some of us wanted to make the best women in cages movie they could possibly make and Roger learned to differentiate between those people. Who wanted to really stay in the business and who just thought this was a stopping ground onto their way to stardom. Most of those people didn't get very far. The ones who really shined, and you know all their names, were people who really did try to do their best work under the circumstances and make movies that were just a little bit better than the movies these other people were making.”

“The way it worked there was that my first movie was co-directed by Alan Arkush and we had been in the trailer department. Some of those trailers had been very educational because you'd look at a movie that was just dreadful and think 'how can we make this seem better.' We would re-edit them in certain ways to look flashier or spiffier than they actually were. We would also learn a lot of things about film grammar and about how many shots you needed to make an idea work. So, when you finally got onto a set you realized there were certain shots you didn't need because you'd already done the short version. It saved us a lot of time, so when we got our first movie, we were able to do it in ten days for sixty thousand dollars and have it turn out because we knew what we were doing. The movie was Hollywood Boulevard and I wouldn't say it was any kind of classic, but it's almost a documentary of what it was really like making movies at that time under those circumstances. As a result, Alan got to do Rock N' Roll High School and I got a chance to do Piranha. Those were solo pictures that, as Roger often said, 'if you do two good pictures for me, you'll never have to work for me again'”

Dante on The Howling;

“There hadn't been any werewolf movies in some time, and I think they were generally being considered old hat. We wanted to go back to the classics that we loved, but sort of bring it into the modern world and not have villagers and torches and such. As far as the designs go, we didn't want to do the standard thing where you just have the hands & head because that's all you can afford. So, Rick Baker, who had long wanted to do a werewolf movie, had these ideas for what we call 'change-o-heads' where it allows you to change a puppet head from one thing to another on camera. So our goal was to do a werewolf transformation all in one shot. Ultimately, as soon as John Landis found out I was doing this picture, he called Rick and said 'you can't do The Howling because you have to do American Werewolf In London' and Rick said 'you've been saying you're going to do that movie for years'. John said 'I'm gonna do it!' and by God within a week he had the financing for American Werewolf. So, Rick said he'd always promised John he'd do that movie, so he couldn't do mine. But Rob Bottin who'd worked on Piranha and was sort of Rick's protege came on instead. Rob did a fantastic job with not much money. We tried a few things. We put people in suits, but they kind of ended up looking like bears, so that didn't work. We ended up building werewolves in pieces, top halves, bottom halves and separate legs and such. It gave the illusion that there was a wolf-like creature that was standing on its hind legs. It worked great. But I think the main contribution to the genre that movie gave was that it was the first self-reflective werewolf picture where the characters in the movie already know what the audience knows. Instead of having to go to the library, or a doctor to find out what a werewolf is, these characters already know what they are because they've seen The Wolfman. That later became quite a popular trend in movies, but I think this was the first time that was done.”

“One day at my ratty office in Hollywood, this script appeared for Gremlins. I was sure it had gone to the wrong address, I couldn't figure out why I would be getting a script from Steven Spielberg. It was a horror film that Chris Columbus had written as a spec script. Spielberg had found it, he'd seen my last two pictures and wanted to start his new company Amblin, and open with a low budget horror film. Initially, it was a much darker version of the movie, the Gremlins kill his dog and eat it, they kill the mom and bounce her head down the stairs. It was really pretty grim, which is why he came to me. Because it was a Spielberg picture it was not subject to the kind of scrutiny most films would be, so later when the film was done and the studio saw it they were just horrified. They just couldn't figure it out. They said, 'these gremlins are just so disgusting, do we need to have so many of them?' so Spielberg said 'well, we can cut them all out and call it People!' We finished the movie and took it to a preview. And because nobody knew what it was, nobody expected it, it was the right movie at the right time, the preview was amazing. It was so successful. Now, all of a sudden the studio thought the movie was terrific. It was a huge movie that summer and the reason I'm still in the business.” 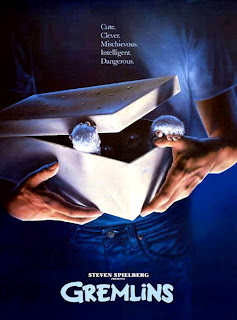 Dante on Masters of Horror;

“Masters of Horror was a great deal for us guys because we were promised no money, but also promised total creative control. There was a list from Showtime of things you couldn't do like rape nuns and shoot the genitals of children, obvious things you don't wanna do, but for the most part they really did leave us alone. It was an opportunity for a lot of people who were tired of being told what to do, to be able to choose what they wanted. Because I was pissed off about politics at the time and unhappy about the current administration, what was going on in Iraq and how nobody was saying anything. They were all just cheering and saying everything was great. I chose to be a counterpoint to that and did this very obvious propaganda Anti-Bush movie, because I could. And I knew that once it was done I could send it to every right-wing pundit I knew and get them upset. The other one I did, The Screwfly Solution was a story that I'd wanted to do for a long time as a feature. After I done it for Masters, it was odd because it was the first thing I'd ever done with absolutely no humour, because it's just not a funny story. I realized then that if I'd done it as a feature it would've been a complete disaster because nobody would pay to be as depressed as people were after seeing that. It was lot of fun, and would've liked to have done more. There is another project that Mick Garris is working on called Nightmare Cinema, which is a similar thing, but with a series of features. If that happens, I'd love to do one of those.”


Both talks were spectacular, and among the most informative I've seen, mainly because Dante has worked in both the independent and studio systems. He concluded by saying that this fall he is shooting a zombie comedy called Burying The Ex, which he “hopes is going to be funny, because I know it's going to be cheap.” I'm sure with Dante at the helm, it'll turn out just fine.
Posted by Jay Clarke at 12:00 PM