I must bring your attention to a movie I watched last night called Forbidden World aka Mutant. 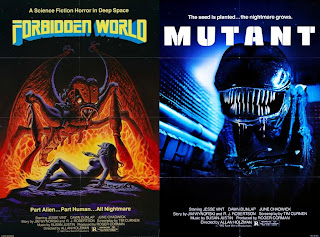 This Corman-produced Alien rip-off is great! Featuring effects from John Carl Buechler (who would later go on to bloody up Friday the 13th Part VII & Hatchet among others) this sci-fi has copious amounts of goo, futuristic gadgets and perhaps most importantly, as glimpsed at 1:45 of the trailer below, space showers!

Trailer courtesy of Sleaze-O-Rama.
Posted by Jay Clarke at 10:12 AM