Last Wednesday, I took in the latest lecture of The Black Museum at The Royal. This one was kind of special in that the presenter was writer, film programmer and cinephile Kier-La Janisse who, many years before, founded the Miskatonic Institute of Horror Studies; the model for which The Black Museum was based. This month's lecture was an exploration into the history of the classroom safety film. 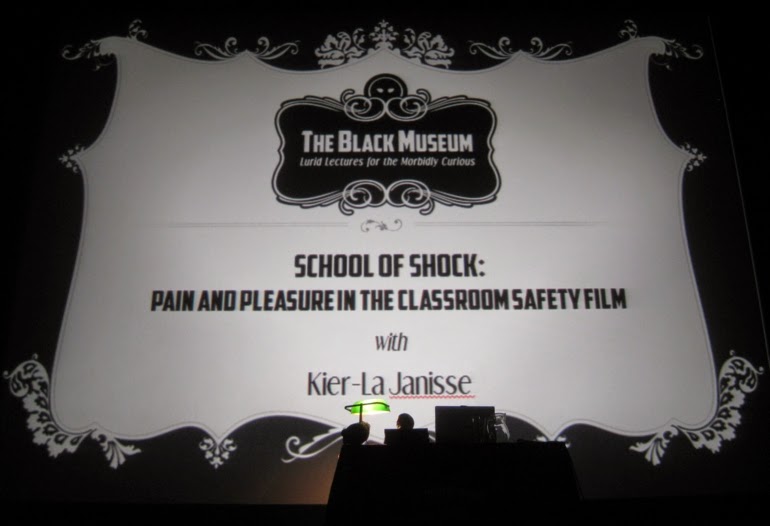 With Janisse at the helm, this lecture felt different for two reasons. First, she had conducted this lecture many times before, so was completely off book and thus free to move about the stage. Not tethered to her desk, like many of the previous presenters, it made things much more stimulating visually. Second, School of Shock featured large chunks of video in between academia. Now, Janisse did point out that her full lecture on this subject is six hours long and what we were seeing was an abbreviated version, so I would imagine that one has a different balance between the visual and auditory.


Janisse began the lecture talking about the beginnings of educational films in Chicago circa 1912. Around 1923, there was a shift from 22mm to the more popular 16mm, as its portability enabled government programs and church groups to purchase films & equipment to tour around rural communities.


The film market wasn't initially brought into the classroom - it was generally regarded as a lazy way to teach - until the start of World War II. The army employed this method to not only bolster morale for the war effort, but also as quick and efficient visual technical manuals for training new recruits. After Pearl Harbour, Hollywood started helping out, lending many of their talents to the production of these films.

Janisse focused her talk mainly on the time period from 1958-1985, which is known as The Golden Age of The Classroom Film. In 1957, the Russian launch of Sputnik (and subsequently Sputnik II) caused an uproar within America's scientific community. How is it that the Ruskies were able to get so far ahead of their Western counterparts? It was decided that to get ahead of their Cold War adversaries, the system needed an overhaul. Thus began a new era heralded by The National Defense of Education Act in 1958, followed by the Elementary & Secondary Educational Act in 1965.


There were many filmmakers who thrived in this climate. Quoting film archivist Geoff Alexander, Janisse summed up this era beautifully and led us into the next section of the lecture on child safety;


“...It was cinematic socialism thriving in a capitalist context, the money flow moving from the Federal government to the school districts, then to the film companies, and eventually into the pockets of the filmmakers. It was a great time to be a filmmaker, with ready-made audiences and an almost endless stream of funding.”


One such filmmaker was Sid Davis, whose name is most associated with sensationalist educational films. He made over a hundred films in his career, with colourful titles such as The Dangerous Stranger (1950), Rape and the Rapist (1978) and the flagrantly homophobic Boys Beware (1961).


To illustrate this section, Janisse screened Davis' 1951 film Live & Learn (which features his daughter Jill) and a few safety spots from the UK, including this amazing one narrated by Donald Pleasance.


Janisse then spoke of a man named John Krish. In 1977, this ex-British transport worker was commissioned to make a film about transit safety, specifically anti-vandalism. His employers told him not to include any actual vandalism, as to not incite the very activity they were trying to prevent, so Krish chose to employ a fantasy world context to get his point across. The resulting film The Finishing Line is so brilliantly shocking, it could've only been conceived in the seventies.


What is even crazier about this film is that Krish, seemingly not concerned with absolute safety on set, chose to shoot the film on a working railway line. Using local schoolchildren, they just filmed when the trains weren't going by! Not to mention all those jagged chain-link fences and steel tracks these kids seem to running toward full-tilt.


The next section of the lecture focused on the perils of drugs. Janisse, not surprisingly, began this section with the propaganda film Reefer Madness. Originally financed by a church group in 1936 under the name Tell Your Children, it was bought by producer Dwain Esper a few years later, recut and redistributed as its more commonly known title as an exploitation film. Its intended purpose is a shining example of how drug films generally skirt actual fact for fiction in order to deter youngsters who may not as yet begun to experiment in such things. 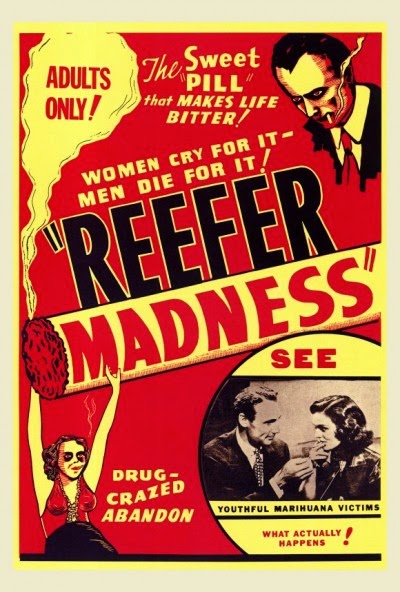 Moving on from marijuana to LSD, Janisse spoke of the government's experimentation and how its psychedelic nature made for some confusing PSA's that often seemed to blur the line between anti and pro.


If there was any doubt, Janisse then showed a clip of an interview with actor Richard Lynch were he describes how, while under the influence of LSD, set himself on fire in Central Park. She also showed a film called All My Tomorrows about the dangers of mixing alcohol with barbiturates.


The most disturbing film of this section was Dead Is Dead. In 1974, comedian Godfrey Cambridge felt that drug PSA's were being geared mostly toward middle-class white populations, so he took it upon himself to make his own about the heroin addiction running rampant in the more poverty-stricken communities.


Janisse said what made this film stand out was that it not only had Cambridge speaking directly to the audience, as opposed to the detached narration of similar films, but he also mentioned addiction as all encompassing and something that inflicted our entire society and not just the sections that are most often ignored. The above was just the trailer and does not include all the grim photos of dead junkies and the physical traumas of prolonged drug use. This movie was predominantly shown to elementary school students, so I can only imagine the reactions this must have garnered.


The next section, the most alarming by far, was the one on Driver's Education.


Janisse began this section at the end of the fourties, when the mass production of the rocket V8 engine had contributed to a twenty per cent increase in road fatalities in the United States. With the rise of street racing culture, it is not surprising a good number of those were teenage boys. Safety filmmakers were quick to combat this, and soon the term “Teenicide” was coined.


The word was first used in the 1949 film Last Date featuring pre-Bewitched actor Dick York, which then became the template for all the driver safety films of the time period.


As time went on, there was a shift to the more graphic and realistic. Slideshows with names like Suicide Club and Highways of Agony featuring pictures of real traffic accidents made the rounds, eventually evolving into film reels.


In 1959, a group of photographers, in co-operation with the Ohio State Highway Patrol, made the film Signal 30.


When I was a teenager about to take Driver's Ed, I heard stories that to get your license, you had to sit through hours of actual traffic accident carnage. I never ended up seeing any of that - maybe laws are different in Canada - so I always figured it was an urban legend. Nope, Signal 30 is that footage and it is exactly as advertised.


And if that wasn't enough to drive the point home, Janisse also introduced us to Australia's Transport Accident Commission. In the late eighties, drunk driving was becoming a real problem Down Under, so the TAC decided to roll up their sleeves and do something about it. The result was a slew of unrelentingly brutal ads that started airing at dinnertime. There was an immediate decline in impaired fatalities.


Below, is a campaign montage that was put together for the 20th anniversary. WARNING: These don't fuck around. I don't mind telling you that seeing this unrelenting video on the big screen left me a little shell-shocked. But hey, if it keeps one person from getting behind the wheel while drunk, it's worth it.


After we'd all had a moment to catch our breath, Janisse made an excellent point as to why the TAC spots were so effective over all that had come before them. Films like Last Date had characters that we could relate to, but weren't really graphic enough to really get the point across, and stuff like Signal 30 was so unflinchingly graphic that it eventually caused a disconnect with the viewer. The TAC videos use both in equal measure and thus accomplish what each by themselves could not.


The last section of the lecture was about workplace safety. Janisse told us about a company called Centron which produced hundreds of these films. One of the filmmakers on their payroll was none other than Herk Harvey of Carnival of Souls fame. It wasn't unusual for genre filmmakers to hone their skills making industrial films (George A. Romero and William Crain are two other examples) and the grim nature of the subject matter would certainly seem to fit with their sensibilities.


In front of this film, Janisse also stuck an infamous Canadian PSA by the Workplace Safety and Insurance Board. I instantly remembered this one, as this series of ads tore up social media when they burst onto television screens in the late 2000's.


Janisse has done this lecture all over the world and usually tailors the videos to whatever country in which she is presenting, but I'm glad she snuck in a little CanCon, because that one is a doozy. She also mentioned that she refrained from using anything from the NFB, as they tend to be all class, and rarely go the sensationalist route.


So, why did the Golden Age of the Classroom Film come to an end? Well, Janisse offered up two reasons. First, that era began because of The Cold War, so when that wound down, so did the boom for classroom film production. The mid-eighties also brought in the advent of video tape, making it less profitable for the distributors who cranked out content.