The new pseudo-sequel of The Town That Dreaded Sundown had its Canadian premiere last week at Toronto After Dark. 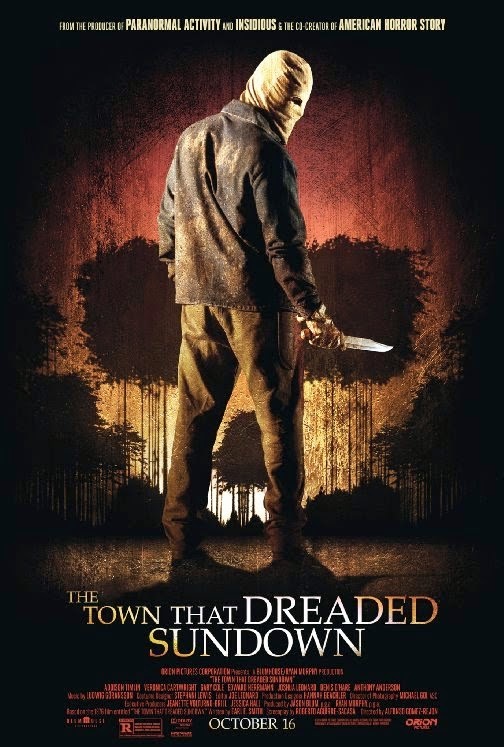 Sixty-five years after the gruesome events in Texarkana, another masked killer is on the loose. With the local authorities being about as useful this time around, the survivor of the first attack, high school senior Jami (Addison Timlin), takes it upon herself to do some investigating of her own.

To echo what TAD programmer Peter Kuplowsky said in his intro, director Alfonso Gomez-Rejon “really shot the shit out of this film!” I mean this movie is gorgeous and looks ten times better than it has any right to be. From the very first shot, which features a long, swooping movement through a drive-in theatre as it weaves through all the cars and various attendees, to the boldly stark kill sequences, Gomez-Rejon shows he is taking this material seriously.


And that is what immediately struck me about this new Town That Dreaded Sundown. The narrative was decidedly meta, wherein the murders of 1946 and the subsequent 1976 film had occurred, however it was played completely straight. The brilliantly conceived murder scenes were cold and clinical, so that, much like David Fincher’s Zodiac, we took no joy from them. This kept the project from feeling like a half-assed Scream sequel as a result.

The cast was stacked with genre veterans that included the likes of Veronica Cartwright, Gary Cole and Ed Lauter, for which this must have been one of his last roles before his passing last year. Addison Timlin was solid as the embattled heroine and was just as strong and likable here, as she was in 2013’s fantasy actioner Odd Thomas.

While it is true that the ending was a bit of a letdown – an unfortunate side effect of studio interference I hear – it by no means soured the overall strength of the piece. There is an air of substance to Town that is rarely present in projects bearing the mark of the “re-whateverthefuck.” Gomez, cutting his teeth on many episodes of the television show American Horror Story, has now graduated to telling competent horror features. He’s a bright young talent that I’m sure we’ll be hearing more from soon.
Posted by Jay Clarke at 10:00 AM