The Squad on Blu-ray

Before I get to some of the great titles I saw at this banner year at Toronto After Dark, I have another guest post from Canuxploitation's Paul Corupe. This time, he has the rundown on the new Scream Factory Blu-ray release of the South American horror flick The Squad. Take it away, Paul.


Fall in maggots! Time to enlist in The Squad, a respectable 2011 Colombian horror-thriller that seems to have received most of its marching orders from John Carpenter's The Thing. Though The Squad fails to reach those lofty heights, the film is well-shot and occasionally atmospheric as it weaves some similar paranoia-based siege thrills. Though Scream! Factory usually opts for vintage horror, The Squad still feels akin to many of their other releases—a low-budget paranormal outing set in the middle of a civil war that manages some impressively tense scenes despite difficulty in getting them to pay off properly. 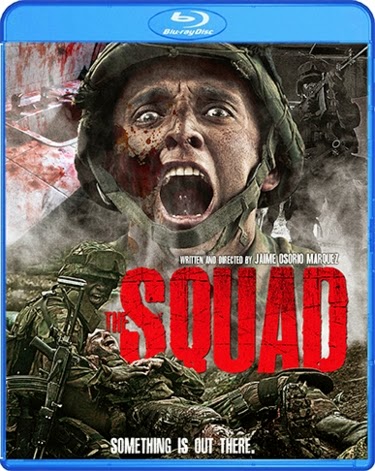 In the film, a crack military squad led by Sanchez (Mauricio Navas) reclaims a base only to find it eerily deserted, with only blood-stained walls, vague warnings written in chalk and a logbook with increasingly curious entries. Hearing muffled noises, one of the soldiers knocks down a thin cement wall and, behind it, discovers a woman tied up, seemingly left for dead. The rest of the unit debates about whether to free her—is she a spy, innocent civilian or something else entirely? One notes that she must have been tied up for a reason, and his insight proves to be prophetic. When they do free her things start to get even stranger, as madness and suspicion threaten to rip the squad apart, sometimes literally.

An interesting, but uneven effort that made the Festival rounds in 2011, The Squad is intended as an allegory to its war-torn country of origin, currently host to the longest-running civil war in history that began all the way back in 1964. The film plays off local fears and paranoia about sudden violence, missing family members and citizens caught in the middle of warring factions in this seemingly unending conflict. The Squad taps into this nerve-wracking situation where a long forgotten land mine can change anyone's life in a split second, and highlights the utter weariness of the shell-shocked soldiers, damaged from their long tour of duty, as they have trouble distinguishing reality from fearful fantasy.

Not surprisingly, the film focuses on the soldiers themselves, these war-ravaged young men who are unsure of the nature of the curse that seems to have befallen them. The film trades in stereotypes--gung ho heroes and reluctant fighters—but there are some decent dramatic moments that develop as the squad tries to figure out what happened to the previous unit and whether recent history is repeating itself. 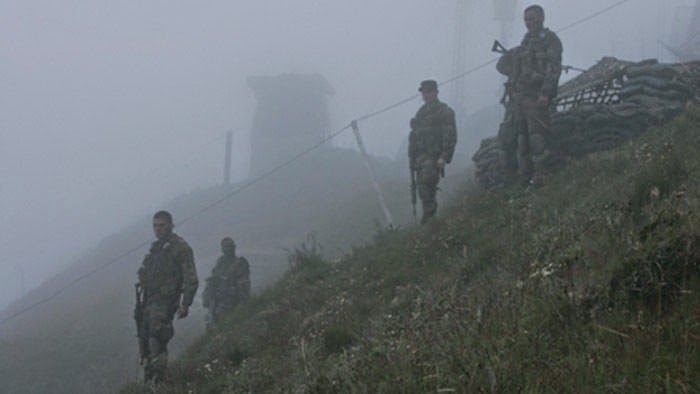 Director Jamie Osorio Marquez makes excellent use of his claustrophobic bunker setting, with pleasantly washed-out colour palettes that give the film a notable visual richness. Though the film manages some genuine frissons as the squad explores the fog-plagued bunker, fearful of enemy ambush, it noticeably has more trouble when Marquez had to sneak in actual scares. He seems unsure of how to lead the audience's eye and where exactly a frightful image should pop up onscreen. A scene of a leg amputation, while somewhat gory, doesn't have as much impact as it should, due to camera placement choices and unsuccessfully trying to get the point across by squishy sound effects instead.

The ambiguity of the terror plaguing the squad is also not handled terribly well--if anything, it's a little too on-the-nose while setting up its red herrings. The film's invented haziness about who the woman is and what she's doing comes off as too calculated and obvious, with many warnings about witches and eerie forces that tip the film’s hand pretty early on.

A film that looks this nice should have an eye-popping transfer, and the film’s new Blu-ray shows off the occasionally gorgeous cinematography of hazy mountain backgrounds. The creepy, active soundtrack also gets a nice boost from a lively DTS track. The presentation is top-notch, as we've come to expect from Scream! Factory. However, the only real extra is a 20-minute "making of" doc that has some interesting behind-the-scenes footage, but was seemingly created as a series of promotional pieces.


While far from a classic, fans of siege horror will surely have a good time with The Squad–especially those partial to more recent horror festival favourites. So move out and pickup this one up, soldier!
Posted by Jay Clarke at 12:30 PM