Morning all! Sorry I've been slacking off this week, but I really couldn't do much of anything until that “little movie” was on the other side of me.

As per usual with big event films, there was the initial hyperbole followed by the naysayers beating their drums loudly to be heard in the din. I myself, enjoyed it a lot. It had a good mix of new and old, and my minor nitpicks were just that. Elated as I was though, I did feel there was something missing that I couldn't quite put my finger on.


Subsequent to my viewing of the film, a friend of mine posted a comment on Facebook that I think hit the nail on the head.


“I thought it was a very good Star wars film, but also knew within ten minutes that I didn't need it.”


And there's the rub. The prequels were shit, there's really no denying that, but I have realized that no new Star Wars movie is ever going to approach the Original Trilogy - yes, even ROTJ. It's not only because of the age I was when I saw them, but also the environment in which they were made. As a person who is by nature nostalgic, it's been a sobering last few days.


But, enough of this foolishness, on with the news...

You know, it's been such a long time since I've watched The Simpsons, that it actually took me about halfway through to realize the “animals” were the school bullies. Great mash-up, if not a little disturbing.


I found these awesome pins from artist Gargledmesh on Big Cartel this week. 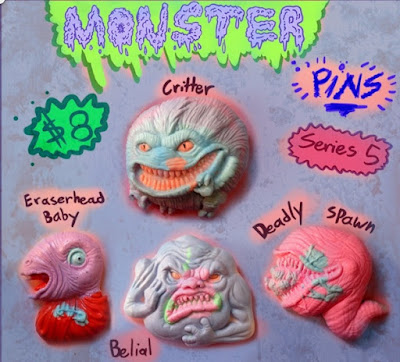 There's a holiday sale on right now, in which you can Buy 2 and Get 1 Free. For eight bucks each, I am finding them really difficult to resist. For more info, click here.

You Are What You Eat.

Made by Grace Nayoon Rhee, it's like a weird hybrid between Robert Morgan & Don Hertzfeldt. Love it. For more of her work, click here.
Posted by Jay Clarke at 11:24 AM