Who Would You Save?

The film to which I was most looking forward at this year's Blood In The Snow was Ryan M. Andrews' newest, Save Yourself. 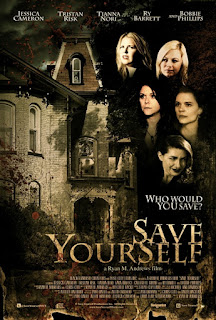 Five filmmakers travelling to Los Angeles run afoul of a mad scientist (Ry Barrett) who intends to use them for his cruel experiments.

This is definitely Andrews' best so far. Having worked with a lot the same crew in his previous films, I believe they have now really started to click. As mentioned in the post film Q&A, Andrews and his DOP Michael Davidson (who also did a spectacular job on last year's Berkshire County) have formed a visual shorthand which stems from their intense love of the horror films they grew up on. Save Yourself contains several of these cues, The Texas Chainsaw Massacre being the most evident.

While the film was pretty to look at, the real draw here was the impressive ensemble assembled here. Anyone familiar with the current landscape of independent horror is no doubt familiar with Tristan Risk and Jessica Cameron, and right behind them, ready to explode, are Tianna Nori and Caleigh Le Grand. Much like what I said about Secret Santa, Save Yourself did not make it immediately obvious who the Final Girl was, which gave the film an added component I really appreciated. Rounding out the cast is the ubiquitous Ry Barrett, who you can tell was relishing the role of the evil Nazi scientist Dr. Sauter every moment he was onscreen.

I found Save Yourself way more palatable than Gavin Michael Booth's The Scarehouse, the other recently released female ensemble horror. Not only were the characters more likable and relatable, but the movie itself doesn't dwell on the violence as much. Andrews shows just enough to get his point across, but lets his actors do the heavy lifting. I also felt it was a good decision to play the material completely straight, as the premise could have drifted into camp very easily.

For me, there was also a surreal quality to the movie, as the theatre used in the first act is right around the corner from my house. It is very possible I could've ended up in this movie had I not already been en route to Fantasia when the shooting took place. Ah well, the old Mews sure looks great on camera.


Save Yourself is pretty much exactly what I wanted it to be; a simple premise driven by its strong ensemble and fine cinematography.
Posted by Jay Clarke at 10:00 AM

Didn't realise you live in the Dago block of DT Oakville. There are some stores there that have been around for decades.

It looks a lot different now, they did a whadayacallit "revitalization" in the last 5-10 years.