I've re-watched the show & film, read the accompanying written material and absorbed all the interstitials, so all that's left to do now is watch these newest chapters. Let's Rock!

The Turn of the Century.


Cary Fukunara (of True Detective fame) is bringing Caleb Carr's novel The Alienist to the small screen and here's the trailer.


I loved the novel and it sure looks like TNT has upped their game here. One of the books greatest strengths was how well described late-1890's era New York was and I get that same impression from this trailer. I don't know if it will be as gruesome as it was in the book, but considering what NBC got away with during Hannibal's time on the air, who knows?

His Name Was David. 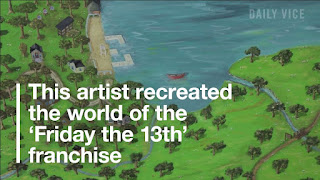 Looking at these pictures, it totally reminds me of the stuff I used to draw when I was a horror obsessed kid. Digging around trying to find that above video without the annoying ad embedded into it, I also found Arsenau's video game walkthrough project. This guy is insane!