Return To The Wonderful & Strange

I absorbed four episodes of the new Twin Peaks on Showtime last night, along with mass amounts of donuts and cherry pie. And it was glorious. 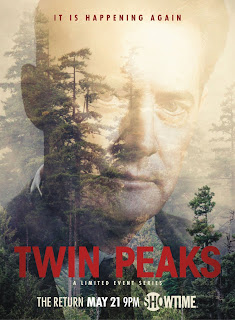 After some decidedly fleeting reboots of beloved shows of the past, I was cautiously optimistic about this new chapter. I now realize I had forgotten that even Lynch on his worst day is still more fulfilling and resonant than ninety-five per cent of everything else out in the world.

I feel this new Twin Peaks season is an extension of where he is now as an artist. If the mid-range budgets of Hollywood had not dried up several years ago, Lynch would probably be making movies very much like what I just witnessed. Now completely untethered from compromise, this is everything in his creative arsenal. Last night, I saw visual effects he hadn't used since his university short film days, as well as the continued exploration of the elongated pace of this last two film projects, Mulholland Drive and Inland Empire.

Lynch, Mark Frost and Kyle McLachlan were correct to warn people that this new incarnation of the show would not be an exercise in nostalgia. Though many characters have returned – and boy is it great to see them again – there are new stories to be told as well as the most important query – what happened to Special Agent Dale Cooper?

This new Twin Peaks is also way more like Fire Walk With Me than the original show. The regular Lynchian quirkiness still permeates, but the darkness is front and center, at least for the majority of the first four episodes I saw. Also, in true Lynchian fashion, he doesn't feel the need to give you all the information up front. I've been digesting it since and my brain is doing somersaults and I'm loving every second of it. It happens every time Lynch gives me a new gift and I don't know that there's another filmmaker who I can say that about. Maybe Tarantino, but that's more of a oh-I-need-to-watch-every-movie-and-show-he's-referenced-here kind of thing. 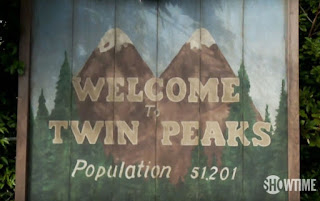 I'm thrilled with what I've seen so far. You really have no idea where the story is going to go at any moment, and man that is so rare in this day and age. I'm going to cherish this revival. I really am.
Posted by Jay Clarke at 12:08 PM