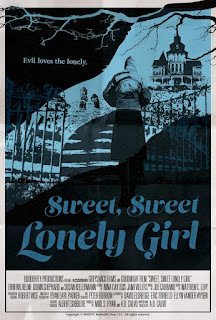 While caring for her reclusive Aunt, Adele (Erin Wilhemi) strikes up a friendship with a townie named Beth (Quinn Shephard) and quickly falls under her influence.

Sweet, Sweet Lonely Girl was a link that dropped in my inbox last month, so I had no idea what to expect, but I dug it quite a bit. It was the first time in a while that I'd seen that ever-popular retro-style done in a way that did not feel gimmicky. Calvo took great care to set the world in 1980 New England, but didn't feel the need to wave it in my face every scene. 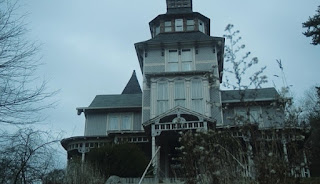 Though I've heard it compared to Mario Bava's gothic oeuvre, I would offer that Lonely Girl shares more DNA with John Hancock's Let's Scare Jessica To Death. Not only were they both shot in Connecticut, but there were a few plot points – like the gravestone rubbing scene – that just have to be direct homages. With its setting and deliberate pace, it also reminded me of Oz Perkins' newest I Am the Pretty Thing That Lives in the House. Thankfully, due to its multiple characters there was more for me to latch onto here. Not lost on me either was the similarity between the posters for Lonely Girl and 1976's The Little Girl Who Lives Down the Lane.

Both leads were terrific in this. Wilhemi's virginal, straight edge was contrasted beautifully by Quinn Shephard sensual, dangerous energy. These two actresses have been in the business for a while, but this the perfect project to have them be front-and-center. Like I said before, I really felt the vintage style of the piece melted away as the film went on, making it really more about the relationship between Adele and Beth.

Sweet, Sweet Lonely Girl was a simple modern gothic tale that, within its less than eighty-minute run time, gets in and gets out. Its conclusion may leave you scratching your head for a moment, but I thought this was a solid indie. Needless to say, I am looking forward to seeing what comes next for Calvo, Wilhemi & Shephard in the future.
Posted by Jay Clarke at 10:00 AM