It's Hard Out Here For A Finch.

I played through the video game What Remains of Edith Finch last weekend and though it's not a horror game per say, I still feel compelled to post about it. 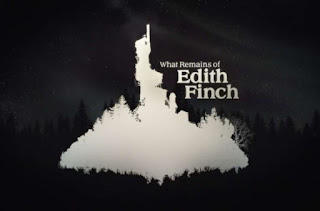 This game was really wild. Having now played a few like Edith Finch (Gone Home, Virginia) I discovered that this subgenre actually has a name in“walking sims”. It's not a very exciting name, but these experiences are at the forefront of showcasing games as art. I was very fond of Giant Sparrow's previous game The Unfinished Swan and knew that I was in for a sizable dose of whimsy, but they really upped their game here.

While it is true that this game was about death and tragedy, it also had this really touching theme of family and the connection to our ancestors. The storytelling was top notch and I was taken aback by the range of gameplay from level to level, even within the restraints of the first person mechanic. 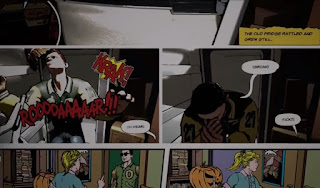 My favourite would obviously lean toward the Barbara level that takes place inside the panels of a Tales From the Crypt style comic book, but the batshit Molly sequence with its Im-a-cat-Im-an-owl-I'm-a-shark-I'm-a-worm-monster-thing was a fitting starting point for what was to come. Perhaps the story that hit home the most for me was Lewis', as I've often drifted off into other worlds during the monotonous hours between nine and five.

As with Swan, the score here was terrific and really accentuated the universe inhabited by the Finches. I didn't necessarily feel like it was a short experience for the twenty-seven dollars, but I would have liked more replay value. While Swan had balloons to collect, the remaining trophies in Edith Finch can be gobbled up within a half-hour. 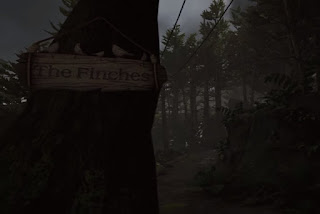 I really enjoyed What Remains of Edith Finch. Despite its morbid amount of death and sadness, there was also a message of hope that no matter how bad things get, it only takes one good event to turn it all around. I like that.
Posted by Jay Clarke at 10:00 AM